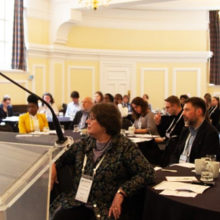 The event, one of the key activities leading up to the 75th anniversary of the Microbiology Society in 2020, brought together a diverse audience. This included representatives from academia, industry, science policy, research funders and government, and encouraged them to think about how their work impacts on the SDGs and how they could get more involved in the project.

“Microbiology has made our present better than our past, and can make our future better still.”

Professor Judith Armitage FRS (President of the Microbiology Society and Professor of Biochemistry, (University of Oxford, UK) delivered the opening address, giving examples of how microbiology has contributed to the progress of sustainable development in recent decades, from the discovery of antibiotics and vaccines to bioremediation and improvements in water sanitation and hygiene. Warning that progress was not guaranteed and not without cost given significant challenges such as antimicrobial resistance (AMR) and climate change, Professor Armitage stated that microbiology was essential to addressing these key challenges and achieving the SDGs. She ended by emphasising the importance of microbiologists, policy-makers and other key stakeholders working together to propel us towards the global goal of “a sustainable future”.

“A world in which the science of microbiology provides maximum benefit to society.”

Professor Paul Kellam (Chair of the Microbiology Society Policy Committee and Professor of Virus Genomics at Imperial College London and Vice President of Infectious Disease and Vaccines at Kymab, UK) then introduced the key aims of the project, noting that although microbiology could contribute to many of the SDGs, a major challenge was to identify where it could have the greatest impact. To address this the Society has put out  a call for evidence, in order to develop case studies, and workshops were being planned to promote knowledge exchange between stakeholders including policy experts.

Panel discussion: Opportunities and Challenges for achieving the SDGs

Dr Lisa Cross (R&D and Industry Scientific Portfolio Manager, Centre for Environment, Fisheries and Aquaculture Science,Cefas; Weymouth, UK) chaired an engaging panel discussion which brought together microbiologists from a range of disciplines to discuss how their work addressed the SDGs, and the major barriers to progress.

Professor Penny Hirsch (Research Scientist, Rothamsted Research, UK) discussed her career at Rothamsted Research, an agricultural research institute focusing on arable crops. As a soil microbiologist, she described how the development of genome sequencing and metagenomics had advanced understanding of the microorganisms present in soil and how they contributed to soil fertility as well as greenhouse gas emissions. One of the major goals for her field is to achieve sustainable food production. This comes with different challenges in the developed vs developing world, and requires moving away from observing soil microorganisms, to management and demonstration of their beneficial impacts.

Professor Sir David Baulcombe FRS (Regius Professor of Botany and Edward Penley Abraham Royal Society Research Professor, University of Cambridge, UK); welcomed the 'A Sustainable Future' project and highlighted that the SDGs could be used as a meaningful framework to identify research impact. Discussing how his field of expertise in plant pathology contributes to crop production, he stated that 12% of crop yield was lost over the years due to epidemics and emerging plant diseases. He also provided a toolkit of resources for biotechnology such as virus vectors, enzymes and RNAs that were used for genome editing and the development of pharmaceuticals among others. Sir David described what he considers the three barriers to progress on the SDGs; regulation, lack of microbiological expertise, and poor engagement between those that develop biotechnology and those that use it.

Professor Kevin O’Connor (Director of BEACON, the Science Foundation Ireland Bioeconomy Research Centre and ‘A Sustainable Future’ project Steering Group member); explained how his research largely related to responsible consumption and production which is Goal 12 of the SDGs. His field of work helps to promote better management of fossil-fuel based products in an attempt to reduce their usage. In doing so, his team has contributed to developing biodegradable plastics and other environmentally-friendly products, and the production of valuable products from waste. Emphasising how essential microbiology was to the bioeconomy, Professor O’Connor stated that microorganisms were responsible for degrading pollutants and contributing to the production of biomass, the starting point of the bioeconomy.

Dr Tina Joshi (Lecturer in Molecular Microbiology, Lead for Microbial Diagnostics and Infection Control Research Group University of Plymouth, UK and Member of Microbiology Society Policy Committee); described her research which aimed to develop a point-of-care diagnostic to detect the development of AMR in bacteria. Linking her research to Goal 3 of the SDGs ‘Good health and well-being’ Dr Joshi explained how many other SDGs were also affected by AMR including Goal 1 ‘No poverty’ and Goal 10 ‘Reduced inequalities’ as AMR increases. Dr Joshi pinpointed economics as a major barrier to tackling AMR. Despite numerous reports, scientific papers, and statistics highlighting the problem, many promising new antibiotics were failing due to lack of investment.

Identifying common themes and addressing the barriers to the SDGs

A “lack of microbiological understanding” amongst scientists, health specialists, policy-makers and the wider public was repeatedly mentioned as a barrier to the progression of the SDGs. Better education at all levels using public engagement and media campaigns were suggested as a solution to this issue. Dr Joshi despaired that whilst climate change was finally getting the recognition it deserved following recent high-profile campaigns; AMR had not, despite the similar need for urgency.

Balance between fundamental and applied research

Although applied research is needed to provide tangible solutions to address the SDGs, fundamental research shouldn’t be neglected. Professor O’Connor addressed an example of this, recognising  that although his work currently fell under applied research, much of his career was spent on the basic research that led up to this point.

This was recognised as essential to address political barriers such as regulation of the pharmaceutical, agriculture, and biotechnology industries, as well as funding and economic incentives for research and development.

Further information on our 'A Sustainable Future' project can be found on our website or on Twitter using the hashtag #MicroGlobalChallenges.