Jo Verran is Emeritus Professor in Microbiology at Manchester Metropolitan University and an Honorary Member of the Microbiology Society. She is known for her active involvement in microbiology education and outreach, particularly for undergraduates. She launched The Bad Bugs Book Club in 2009 to engage scientists and non-scientists in discussion about novels where infectious disease forms a part of the plot.

A key advocate for boosting education in science, Professor Verran gave the keynote lecture at the Teaching in Higher Education Symposium at Annual Conference 2019 where she delivered an inspirational talk and shared her pedagogical work. She has also developed some well-used resources for schools and some of the resources produced by the Society.

Her research focuses on studying the interactions of micro-organisms with surfaces, such as food preparation surfaces, water pipes and dentures, mainly with a view to prevention. She has worked with surface engineers and other microbiologists to make and characterise novel surfaces, and then see their effect of the viability, attachment and removal of micro-organisms. 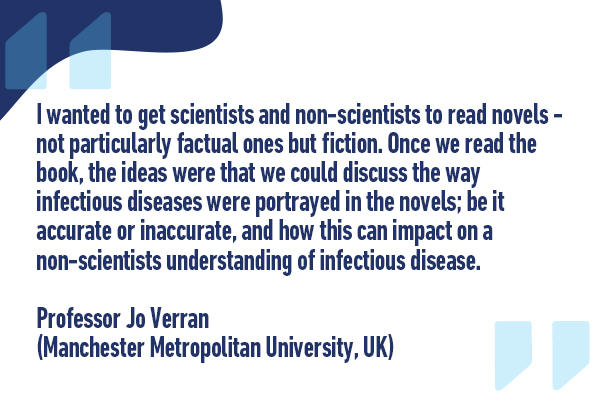 Professor Verran's interest in science communication and public engagement with science has led her to designing and delivering various activities to inform and interest the public in microbiology. Her aim is to encourage participation and discussion around the various themes in the microbiology community. She has been recognised by many organisations across the microbiology community. In 2004 she was recognised by the Microbiology Society for innovation in microbiology education and in 2018 she was awarded the AAAS Mani L. Bhaumik Award for Public Engagement with Science.

In 2015, the Microbiology Society interviewed Professor Verran in our Microbe Talk podcast where she explained her main motivation for starting the book club. She was awarded Honorary Membership with the Society in 2020.

For any more information about the Bad Bugs Book Club and how you can get involved, contact Professor Jo Verran at [email protected] or follow her on Twitter.