A deadly fungus is killing frogs around the world, but the bacteria on their skin could protect them 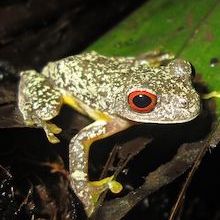 Researchers in Costa Rica have found that some bacteria on the skin of amphibians prevent growth of the fungus responsible for what has been dubbed ‘the amphibian apocalypse’.

Published in the journal Microbiology, the research identified a number of bacteria which could prevent growth of the fungus Batrachochytrium dendrobatidis (Bd). One particularly dangerous strain of the fungus, called BdGPL-2, is responsible for mass amphibian die-offs around the world.

The fungus infects the skin of amphibians, breaking down the cells. As amphibians breathe and regulate water through their skin, infection is often deadly. It is believed that almost 700 species of amphibian are vulnerable to the fungus, and Bd has led to the extinction of 90 amphibian species.

In order to investigate why some amphibian populations in Costa Rica were more resilient to Bd that others, a research group led by Dr Adrian Pinto, Professor at the University of Costa Rica sampled the circulating strains of Bd and the skin microbiome of amphibians at different sites.

To do this, the research group collected wild amphibians from areas of Costa Rica which had a history of Bd outbreaks. “Bd has previously been widely detected in Costa Rica, but this is the first study to isolate and compare the characteristics of different isolates,” said Dr Pinto, “our work showed that the circulating strains of the pathogenic fungus belong to a highly virulent global strain known as BdGPL-2.”

They found that the bacteria on the skin of some surviving amphibians prevented growth of the fungus in the lab. “Amphibian species that survived decline harbor bacteria on their skin capable of inhibiting the growth of the pathogen. However, this inhibitory capacity varies according to which strain of the fungus is being tested,” said Dr Pinto. “These findings suggest that locally adapted skin bacteria may offer protection from the disease.”

Although the researchers expected to see the highly virulent strain BdGPL-2 in Costa Rica, they did not expect to see so much variation in circulating strains. “We were surprised of the phenotypic variations among the pathogen isolates, including their different responses to the antagonistic bacteria,” said Dr Pinto. “Local pathogen adaptations must be considered when designing mitigation strategies for this disease.”

Dr Pinto hopes to combine their findings with other disease control strategies to protect amphibian populations from decimation by Bd: “We will further study the ability of skin bacteria to protect amphibians against disease, as another tool to combat this plague alongside the creation of climate shelters and fostering the amphibians' own immune system,” he said.

Costa Rica is one of the countries that suffered a dramatic loss of amphibian species between the 1980 and 1990. In Costa Rica, there are currently 64 species of amphibians in some risk category according to the International Union for the Conservation of Nature. Species classified as critically endangered include the Holdridge's Toad (Incilius holdridgei), a native species found only in the mountain ranges of the central region; The Variable Harlequin Frog (Atelopus varius), a river species very sensitive to Bd, and several species of river tree frogs of the genus Isthmohyla that live in cold currents in high areas, a habitat where Bd proliferates successfully.

Amphibians are one of the most diverse groups in the tropics and represent crucial links in food webs. Protecting them keeps ecosystems healthy since biological diversity is the basis for resilient forests, thus helping control pests and zoonotic infections.