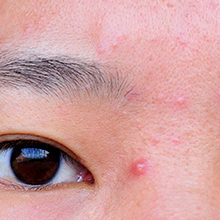 Today at the Microbiology Society’s Annual Conference, researchers will show that the overall balance of the bacteria on a person’s skin, rather than the presence or absence of a particular bacterial strain, appears to be an important factor for acne development and skin health.

Acne vulgaris is a common skin condition that affects 80%–85% of people at some point in their lives. While acne is a disease of hair follicles on the skin, the exact causes of the condition are unclear. The bacterium Propionibacterium acnes has long been associated with acne, but with P. acnes being the most prevalent and abundant species in the follicle in both healthy and acned individuals, its role in acne has not been well understood.

Researchers, led by Dr Huiying Li, an associate professor of molecular and medical pharmacology at the David Geffen School of Medicine at UCLA, used over-the-counter pore cleansing strips to obtain skin follicle samples from 72 individuals: 38 with acne and 34 who didn’t have the disease. The team then used a technique called DNA shotgun sequencing analysis to identify and compare the make-up of the skin microbiome of the two groups, and further validated the findings in an additional 10 individuals.

The researchers were able to detect differences in skin bacteria composition, pinpointing fine genetic differences between the P. acnes strains of the two clinical groups. In the healthy group, the bacterial community was enriched with genes related to bacterial metabolism, which are thought to be important in preventing harmful bacteria from colonising the skin.

In contrast, the acne group contained higher levels of virulence-associated genes, including those relating to the production and transport of pro-inflammatory compounds such as bacterial toxins that are potentially harmful to the skin. Based on the profiles of these genomic elements, the team was able to predict the health status of the individuals with high accuracy.

Dr Li said of the research: “This study suggests that the make-up of the bacteria in the follicles can reflect, as well as influence, the skin condition in acne or healthy skin".

This study provides new insights into the microbial mechanisms behind acne development and suggests that targeted treatments to modulate the skin microbiota and maintain a healthy bacterial balance may be preferable over antibiotic usage, which can unselectively kill both harmful and beneficial skin bacteria. These treatments could include probiotic supplementation or phage therapy that selectively targets specific bacterial strains.

Dr Emma Barnard, a researcher in the Department of Molecular and Medical Pharmacology at the David Geffen School of Medicine at UCLA, who is presenting the work at the Conference said: “Understanding the bacterial community on the skin is important for the development of personalised treatments in acne. Instead of killing all bacteria, including the beneficial ones, we should focus on shifting the balance toward a healthy microbiota by targeting harmful bacteria or enriching beneficial bacteria.”