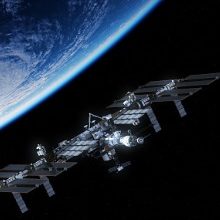 To assist in investigating the potential crew safety risks facing astronauts on the ISS, Dr Matthew Wargo from the University of Vermont was given bacterial samples by the NASA Johnson Space Center.

It is important to monitor the micro-organisms found on the ISS to understand if astronauts – and, in the future, commercial space travellers – could be at risk of infection. Dr Wargo said: “Astronaut immune function declines as time in orbit increases, and the more people who start to go into orbit, the more chance there will be for infections.

“Currently we send up incredibly healthy, extremely well-trained astronauts, but eventually space travel consumers will likely not start from quite as healthy a baseline. Some of the bacteria in the potable water system are known on earth to infect people with suppressed immune function and that is a very low, but potential risk during commercial space flight.”

Among the bacteria found in the drinking water systems on the ISS, six were chosen as representative species: Cupriavidus metallidurans, Chryseobacterium gleum, Ralstonia insidiosa, Ralstonia pickettii, Methylorubrum populi and Sphingomonas paucimobilis. According to Dr Wargo, these microbes are commonly seen in drinking water systems here on Earth: “Because these bacteria are the same common species found in most tap water on Earth, we think that this model community serves a dual purpose to understand drinking water biofilms in space and on Earth.”

The bacteria were found to group together and coat the sides of the water pipes, forming what is called a biofilm. Biofilms occur when communities of bacteria ‘team-up’ and create a shield which protects them against outside influences such as environmental changes and antibiotics.

To study the individual contributions of each species the researchers created new communities without certain members. Biofilm formation proved very resilient, and in the lab biofilm formation could be reduced only by removing both C. gleum and S. paucimobilis.

The bacteria from the ISS were easy to work with and could prove useful for future research into clearing biofilms from drinking water systems. Dr Wargo said, “After using the ISS bacteria for a while, I was struck by their interactions and the tractability of these bacteria to identify molecular mechanisms for community biofilm formation by drinking water bacteria.”

Biofilms are found in all water systems and mostly consist of complex communities of bacterial species. Dr Wargo said, “Biofilms in the drinking water system are something we are all exposed to everyday but […] very little is known about this community.

“Non-sterile water moving through pipes has been around since the Romans and will continue for the foreseeable future, so understanding the microbial denizens that reside there is likely a good idea to have a better understanding of their impacts on health, water chemistry, and pipe corrosion.”