Could dogs be the source of a new flu? 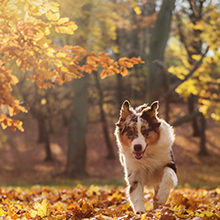 Results from a 10-year study suggest two strains of influenza that could mix and form a dangerous new strain of influenza spread by dogs.

Dr Daesub Song, Associate Professor (Korea University, Republic of Korea) has called for closer monitoring of dogs and other companion animals as they could be a source of novel human influenza strains. He said, “Until now, dogs were considered neglected hosts in the field of flu research. However, after the first report of interspecies transmission, surveillance of flu viruses from companion animals should be further strengthened.”

In the 2000s, several cases of viruses crossing the host barrier were recorded. Most notably, H3N2 bird flu crossed over to dogs and developed into Canine Influenza virus (CIV). Dr Song’s research has found that this H3N2 CIV could combine with H1N1/2009 and form a new influenza virus, called CIVmv.

The emergence of new species of influenza such as this is concerning. Those infected will have not come into contact with a virus like this before, meaning they would not have immunity to the disease. If the virus could be carried and spread to humans from companion animals, it could have the potential to spread throughout the population extremely quickly.

H1N1/2009 is known for causing the 2009-2010 global ‘swine flu’ pandemic. When this strain of influenza combines with CIV in dogs, some of the viruses recombine to form CIVmv. Although CIVmv is very similar to CIV, researchers have calculated there is a much higher risk of the disease spreading to humans due to its high infection rates in ferrets.

Viruses bind to host cells and cause infection via sialic acid (SA) receptors, which differ between species. Ferrets have very similar SA receptors to humans. Because of this, ferrets are considered the most reliable experimental model for predicting and evaluating the risk of novel human influenza viruses.

Researchers are trying to develop a vaccine for the virus. However, due to the high level of mutations, vaccines are very difficult to develop.

Despite being named Canine Influenza Virus, it is not just dogs that can be infected by CIV. During the ten-year study, researchers found that cats were also susceptible to the virus. Dr Song investigated an outbreak of CIV in an animal shelter, during which 100% of the cats were infected and 40% died.

The development of susceptibility in cats is worrying as it shows that CIV can spread amongst different animal species. Researchers have raised concerns as there is a potential for the virus to become endemic in companion animals. As both dogs and cats are in frequent contact with humans, much more frequently than pigs or chickens, the potential risk for a new strain to develop and infect humans is even higher.

Since being first identified in South Korea, CIV has spread to China, Thailand and USA. A case of CIVmv infection was identified in a dog in 2012 following an epidemic of H1N1. Dr Song used this strain in ferrets to determine whether it had the potential to spread from canines to humans. From there, a novel human influenza strain could emerge. Dr Song said, “Pre-existing CIV may recombine or reassort with human influenza viruses and give rise to novel viruses that could in turn lead to unique pandemics.”

Daesub Song will be presenting his work at the Microbiology Society Annual Conference at ICC Belfast, in one of Europe’s most accessible, vibrant and flourishing cities.

In the five years between 2018 and 2022, the Microbiology Society’s principle goal is to develop, expand and strengthen the networks available to our members so that they can generate new knowledge about microbes and ensure that it is shared with other communities. The impacts from this will drive us towards a world in which the science of microbiology provides maximum benefit to society. Find out more at microbiologysociety.org