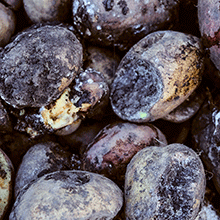 A recently-isolated soil microbe could be used to modify crops and protect them against fungal diseases, researchers say. Researchers at the Agriculture and Food Development Authority (TEAGASC) have identified a novel bacterium which can modify plant characteristics and provide beneficial traits, such as resistance to diseases.

There are limitations to using Agrobacterium to modify crops, including patents and technical challenges. In an effort to overcome this, researchers started to hunt for alternative microbes which may have the same effect.

Dr Ewen Mullins, Head of Crop Science at TEAGASC, and colleagues, have found an alternative to Agrobacterium, which may even be able to modify a wider range of crops more effectively. This alternative bacterium, called Ensifer adherens, is collected from the rhizosphere – the diverse microbial community that lives in the soil around plant roots.

E. adherens can be used to change the genetic material of the plant by a process called Ensifer-mediated transformation (EMT) whereby the plant genome is engineered by the bacteria, and characteristics are modified.

Agrobacterium is recognised as a pest by many plants, meaning they unleash a defence response against the bacteria. Conversely, E. adherens is recognised by plants as a friendly symbiotic bacterium and so provokes a reduced response from treated plants. Thus, E. adherens may be more successful in treating elite plant varieties. EMT has already been used to transform a number of important crops, including tobacco, oilseed rape, rice, safflower and cassava.

The team have already demonstrated the potential of EMT to generate potato varieties with late blight resistance. Late blight is well-known for being the cause of the 1845 potato famine, during which over 1 million people starved to death in Ireland. The disease, caused by a fungus-like mould called Phytophthora infestans, still causes major losses in global food production, costing the €7bn EU potato industry over €1bn in chemical usage and yield losses each year.

Using genes isolated and characterised from wild potato species, EMT can generate potato lines resistant to late blight in around 12 months. The time it would take to achieve a similar effect with traditional breeding practices is around 12 years.

The current method for P. infestans control is fungicides, which are expensive. In order to manage the disease, farmers must use multiple applications of chemical fungicides on their crops throughout the growth season, with applications exceeding 10 per year. It is hoped that introducing novel genetic resistance such as this to crops will reduce the need for fungicides in agriculture.

The main function of the rhizosphere is to regulate soil composition around the roots of a plant, making it an important part of the plant ecosystem. The rhizosphere contains a huge number of microbes, mostly bacteria, which aid in decomposition and nutrient cycling in the soil. The microbes present in the rhizosphere are influenced by the secretions emitted from the plant root, including proteins, sugars and shedded cells.

Dr Mullins predicts there are many more bacteria in the rhizosphere which may be able to modify plants in the same way as Ensifer and Agrobacterium and may even be able to transform a wider range of crops. Most importantly, crop-specific rhizobia can be identified with the capacity to support crop productivity further against the wide range of challenges currently facing food production systems.

Dr Mullins will present his data at the Microbiology Society Annual Conference at ICC Belfast, in one of Europe’s most accessible, vibrant and flourishing cities. His talk will take place during the session ‘Global food security: the challenges for microbiology’ and is titled Harvesting the rhizosphere with the goal of reducing chemical inputs and supporting sustainable crop management practices. The talk will take place at 11:45 on Monday 8 April in the Studio of the ICC Belfast.

In the five years between 2018 and 2022, the Microbiology Society’s principle goal is to develop, expand and strengthen the networks available to our members so that they can generate new knowledge about microbes and ensure that it is shared with other communities. The impacts from this will drive us towards a world in which the science of microbiology provides maximum benefit to society. Find out more at microbiologysociety.org