Honey could be effective at treating and preventing wound infections 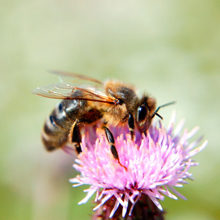 Manuka honey could help clear chronic wound infections and even prevent them from developing in the first place, according to a new study published in Microbiology. The findings provide further evidence for the clinical use of manuka honey to treat bacterial infections in the face of growing antibiotic resistance.

Streptococcus pyogenes is a normal skin bacterium that is frequently associated with chronic (nonhealing) wounds. Bacteria that infect wounds can clump together forming ‘biofilms’, which form a barrier to drugs and promotes chronic infection. Researchers at Cardiff Metropolitan University have shown that manuka honey can not only destroy fully-formed S. pyogenes biofilms in vitro but also prevent the bacteria initially binding to components of wound tissue.

Honey has long been acknowledged for its antimicrobial properties. Traditional remedies containing honey were used in the topical treatment of wounds by diverse ancient civilisations. Manuka honey is derived from nectar collected by honey bees foraging on the manuka tree found growing in New Zealand and parts of Australia. It is included in modern licensed wound-care products around the world. Manuka honey has been reported to inhibit more than 80 species of bacteria, yet the antimicrobial properties of honey have not yet been fully exploited by modern medicine as its mechanisms of action are not fully understood.

Wounds that are infected with S. pyogenes often fail to respond to treatment. This is largely due to the development of biofilms which may be difficult for antibiotics to penetrate - in addition to problems of antibiotic resistance. The results of the study showed that very small concentrations of honey prevented the start of biofilm development and that treating established biofilms grown in Petri dishes with honey for 2 hours killed up to 85% of bacteria within them.

The Cardiff team are working towards providing molecular explanations for the antibacterial action of honey. The latest study reveals that honey can disrupt the interaction between S. pyogenes and the human protein fibronectin, which is displayed on the surface of damaged cells. “Molecules on the surface of the bacteria latch onto human fibronectin, anchoring the bacteria to the cell. This allows infection to proceed and biofilms to develop,” explained Dr Sarah Maddocks who led the study. “We found that honey reduced the expression of these bacterial surface proteins, inhibiting binding to human fibronectin, therefore making biofilm formation less likely. This is a feasible mechanism by which manuka honey minimizes the initiation of acute wound infections and also the establishment of chronic infections.

Ongoing work in Dr Maddocks’ lab is investigating other wound-associated bacteria including Pseudomonas aeruginosa and meticillin-resistant Staphylococcus aureus (MRSA). Manuka honey has also been shown to be effective at killing these bacteria. “There is an urgent need to find innovative 2 and effective ways of controlling wound infections that are unlikely to contribute to increased antimicrobial resistance. No instances of honey-resistant bacteria have been reported to date, or seem likely,” said Dr Maddocks. “Applying antibacterial agents directly to the skin to clear bacteria from wounds is cheaper than systemic antibiotics and may well complement antibiotic therapy in the future. This is significant as chronic wounds account for up to 4% of health care expenses in the developed world.”