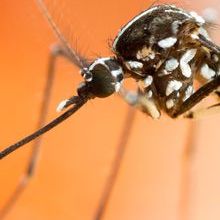 Deadly viruses that are spread to humans by mosquito bites may be significantly more harmful to people with recent sun exposure, researchers at the University of Leeds have warned. They discovered that the risk of getting a severe reaction to a mosquito-borne virus infection increases with exposure to UV light, so the more sun exposure you get, the higher the risk of a severe infection.

Since no effective treatments currently exist for the hundreds of mosquito-borne illnesses, such as dengue, Zika and chikungunya virus, their findings provide a further reason (on top of the need to protect against skin cancer) to minimise exposure to strong sunshine in countries where the mosquitos responsible live – typically in tropical and subtropical regions.

But they also warn that this group of mosquitos responsible for spreading dangerous infections in people (Aedes) is an increasing threat in Europe. Due to global warming, there have been sightings of the Asian tiger mosquito in England and France during summer months.

The UV discovery is one of hundreds being showcased at the Microbiology Society’s Annual Conference at the ICC, Belfast from 4-7 April 2022.

The Leeds research team compared reactions to viruses spread by mosquitos (arboviruses) in three distinct groups of infected mice. One group had no exposure to UV light prior to being infected with an arbovirus, but the others were exposed either to a moderate level (a level likely to cause tanning to human skin) or a high level (a level likely to cause severe sun burn).

Their results showed that mice exposed to the highest level of UV light became sicker than those who had been exposed to only moderate UV exposure. But the mice with no prior UV exposure were the least affected by the virus.

When testing responses to Semliki Forest Virus (one of the viruses carried by Aedes mosquitos and used to model arbovirus infection in mice) for example, they observed a 100-fold increase in the amount of virus in mice exposed to sunburn, when compared to those not exposed to UV.

Furthermore, all mice infected with Semliki Forest Virus without prior UV exposure, exhibited no clinical signs at all.

But all those mice that had been exposed to UV, prior to being infected by virus, exhibited clinical signs and were humanely euthanised within five days of infection.

PhD candidate Ailish McCafferty, who led the research, says: “Mice who were infected following UV exposure had worse virus infections than those that just had virus infection at mosquito bite. We found more virus replication in the skin, more spread to other tissues, for example, the spleen, and the blood, indicating systemic infection. Also, these mice did worse in terms of clinical outcome – suggesting the disease was more severe.”

Sunlight appears to cause an inflammatory response in the skin, like a mosquito bite, which makes the virus infection worse, say the researchers.

“We know from previous research that mosquito bites make the virus infection worse. The bite causes white blood cells – immune cells called neutrophils and myeloid cells – to congregate around the bite. But instead of defending the body against the viral infection. The virus infects some of these cells, allowing the virus to spread,” says McCafferty.

In a similar way, an immune response occurs in the skin following UV exposure. “UV acts in a similar way to a mosquito bite in that the UV causes an inflammatory response and makes the skin more susceptible to infection. You get an influx of white cells rushing to the site of the bite, the virus gets inside and replicates,” explains Dr Clive McKimmie, associate professor of the Virus Host Interactions Team at the University of Leeds School of Medicine.

“When we compared normal resting skin, which is a completely artificial scenario because the virus never goes into resting skin, it doesn't infect as well. And the reason is likely due to inflammatory monocytes at the UV-exposed skin – there were simply more found in the skin  than would otherwise be the case. And so, with more cellular targets, the virus has an advantage and can replicate more efficiently.

“These differences are significant. It seems UV light primes the skin so that when a bite occurs, the body’s response to any virus is exaggerated. Not only that, but this research shows susceptibility lasts not just for 24-hours, but for a week after exposure.”

The 21st century has seen an upsurge in infections of viruses transmitted via the Aedes group of mosquitos, which includes the Yellow Fever Mosquito (Aedes aegypti) and the Asian Tiger mosquito (Aedes albopictus).

Global warming means that Aedes mosquitos pose an increasing threat to humans due to their spread. Historically they have lived along the equator – e.g. south Asia and sub-Saharan Africa – but this is rapidly changing. As our climate warms, more regions of the world are becoming habitable for these mosquitos.

Europe saw a West Nile Virus outbreak during the summer of 2018 with over 1,300 cases, and 90 deaths. 2019 was the worst year on record for Dengue Virus in the Americas. Zika virus caused a huge epidemic in 2016, mainly in South America. In 2019, the first reported cases of mosquito transmitted Zika virus in Europe was reported in France – transmitted by the Aedes albopictus. Closer to home, there were reports of Aedes aegypti (a single mosquito) in Merseyside in 2017.

It is estimated that around 1 billion new individuals (who previously would not have been exposed to mosquito-borne viruses) are likely to be exposed to viruses spread by the two Aedes species of mosquito within the next century due to the expansion of the habitats of these mosquitos.

“You are getting many outbreaks in places many people go on holiday and I don’t just mean Thailand and India, but Spain, the south of France and, particularly, Italy, have mosquitos that can transmit viruses,” warns Dr McKimmie.

“It's becoming more relevant year on year as our winters get milder and mosquitoes like the Asian tiger mosquito, which is better at surviving in cooler climates, are spreading further north as the climate warms up. There have been sightings of this mosquito during a summer in England, and a few sightings of its breeding larvae in Kent.”

Ailish McCafferty will present her data at this year’s Microbiology Society Annual Conference at the ICC, Belfast, which runs 4–7 April 2022. Her talk, ‘Inflammatory response to ultraviolet radiation exposure enhances host susceptibility to mosquito-borne virus infection’ will take place on Tuesday 5 April, 10:45am.