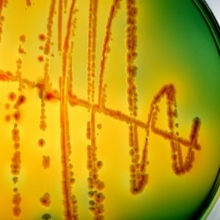 Food poisoning outbreaks linked to disease-causing strains of the bacterium Escherichia coli are normally associated with tainted meat products. However, between 20-30% of these are caused by people eating contaminated vegetables, as was seen in the 2011 outbreak in Europe that caused 53 deaths. Research presented today at the Society for General Microbiology’s Annual Conference shows that the disease-causing E. coli O157:H7 interacts directly with plant cells, allowing it to anchor to the surface of a plant, where it can multiply.

Researchers from the James Hutton Institute in Scotland have identified that E. coli O157:H7 uses whip-link structures on its surface known as flagella – typically used for bacterial motility – to penetrate the plant cell walls. The team showed that purified flagella were able to directly interact with lipid molecules found in the membranes of plant cells. E. coli bacteria lacking flagella were unable to bind to the plant cells.

Once attached, the E. coli are able to grow on, and colonise, the surface of the plant. At this point, they can be removed by washing, although the researchers showed that a small number of bacteria are able to invade inside the plant, where they become protected from washing. The group have shown that E. coli O157:H7 is able to colonise the roots of both spinach and lettuce.

Dr Nicola Holden, who led the research, says: "This work shows the fine detail of how the bacteria bind to plants. We think this mechanism is common to many foodborne bacteria and shows that they can exploit common factors found in both plants and animals to help them grow. Our long term aim is to better understand these interactions so we can reduce the risk of food-borne disease."

The researchers believe that the E. coli O157:H7 bacteria use the same method of colonising the surface of plants as they do when colonising the intestines of animals. The work shows that these bacteria are not simply transported through the food chain in an inert manner, but are actively interacting with both plants and animals.

While outbreaks of vegetable-associated E. coli outbreaks are rare in the UK as a result of strict control measures at all stages of the food chain from plough to plate, they do still occur, as was seen in 2013 when contaminated watercress entered the food chain resulting in seven people being hospitalised. By understanding the mechanisms of how the bacteria interact with plants, the researchers are hoping to find targeted ways to stop the binding, reducing the risk of food contamination.