One year of SARS-CoV-2 evolution 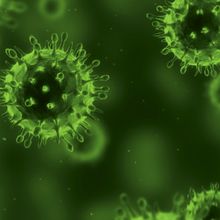 A number of SARS-CoV-2 variants have emerged from immunocompromised hosts, research has identified. It is thought that variants of concern – including B.1.1.7, a variant first identified in Kent – were a result of long-term infection in people with a weakened immune system.

Persistent infections in immunocompromised people could cause the virus to mutate more frequently because the person’s immune system cannot clear the virus as quickly as the immune system of a healthy person.

Authors Professor Wendy Barclay, Dr Thomas Peacock, Professor Julian Hiscox and Rebekah Penrice-Randal explain the importance of monitoring genetic changes in SARS-CoV-2 for future control of the virus: “As more and more variants appear, we are getting a better picture of their shared similarities and differences and can better predict what other new variants will look like. Putting all this information together will also help us design booster vaccines that protect against as many variants as possible or design targeted diagnostics” they said.

Their review discusses where mutations have occurred, what part of the virus they affect and how the resulting variants could impact vaccination efforts. According to the authors, mutations in SARS-CoV-2 are expected, as the virus is adapting to humans. “Sequencing of human seasonal coronaviruses has not been done on a scale like SARS-CoV-2, particularly when they would have initially spread into humans. SARS-CoV-2 is at the start of its journey in humans whereas other human coronaviruses have been around, in some cases, for many decades” they said.

Variants with the same or similar mutations have emerged independently in different countries: “SARS-CoV-2 is probably still finding its way in humans in terms of optimal infection and transmission. The scale of the outbreak and the massive sequencing efforts will identify concurrent mutations; basically, the virus is undergoing the same types of selection pressures wherever you are in the world, and the outbreak was all seeded by the same original virus,” explained the authors.

Mutations of particular interest include those in the spike protein. This protein allows the virus to enter host cells and is the main target of the immune system, including immunity generated by all current SARS-CoV-2 vaccines.

Mutations in the gene that codes for spike could change the shape of the protein, allowing it to no longer be recognised by the immune system. Because this protein is so important for SARS-CoV-2 entry, favourable mutations are more likely to succeed and create new, dominant variants of the virus.

Changes that give the virus an advantage can quickly become dominant. For example, one mutation, named D614G, was found in 80% of SARS-CoV-2 viruses sequenced just four months after it was first detected. Now, viruses without the D614G mutation are only commonly seen in parts of Africa.

Another mutation, N501Y, is found in the SARS-CoV-2 variant B.1.1.7. This mutation is believed to be the result of infection of an immunocompromised individual and may contribute to the virus being more contagious. Infections with this variant have a higher fatality rate. In the UK, B.1.1.7 became the dominant variant within three months and is now responsible for over 90% of infections there.

Significant spike protein mutations discussed in the review include:

In February 2020, a mutation was detected in the spike protein of SARS-CoV-2 and named D614G. This mutation was found to makes SARS-CoV-2 more infectious, however does not make the virus more harmful. This increase in infectivity led to a significant fitness advantage and within four months, 80% of SARS-CoV-2 viruses sequenced around the world were found to have the mutation. Now, only parts of Africa have circulating viruses without the D614G mutation.

Despite initial concerns, D614G does not have an effect on vaccine efficiency and in some cases, viruses with the D614G mutation are more readily cleared by antibodies against SARS-CoV-2.

In mid-2020, reports of mink becoming infected by humans became frequent. In mink, the spike protein of the virus commonly developed two mutations called Y435F and N501T. These mutations allow for stronger binding of the virus to human receptor cells. Viruses with these mutations were found in a cluster of human infections in Denmark, believed to have originated from mink. Concerningly, this variant was able to infect people who had previously been infected with SARS-CoV-2 and were thought to have some immunity to the virus. As a result, 17 million mink were culled.

The mutation Y435F has also been reported to have developed in an immunocompromised person, possibly as a result of chronic infection with the virus allowing it to adapt.

In December 2020, a highly transmissible variant of the virus was isolated in Kent, UK. This variant, named B.1.1.7, contained a mutation in the spike protein called N501Y. Not only does this mutation make the virus more contagious, but it was also found to have a higher fatality rate. In the UK, B.1.1.7 is now the dominant variant, and is responsible for over 90% of infections.

The mutation N501Y has been found to have little effect on immunity from both vaccines and previous infections.

The spike protein mutation E484K has emerged in recent months, once in South Africa and at least twice in Brazil. Variants with the mutation of E484K are able to evade the immune system of both vaccinated and previously infected individuals.

It is thought that this mutation was driven by high levels of population immunity, which drove mutations in the spike protein to evade the immune system. In Brazil, there have been several reports of healthcare workers and other people with antibodies against SARS-CoV-2 being reinfected with variants with the E484K mutant, raising concerns about vaccine protection against this variant.

The review also examines mutations which make changes to other parts of the virus, such as ORF8, an accessory protein that is thought to supress the host immune system. Viruses with a deletion in the gene that encodes for ORF8 has been found to cause less severe clinical disease.

The authors of the review have called for increased global efforts to monitor SARS-CoV-2 mutations. Currently the United Kingdom and Denmark perform disproportionately high sequencing of the SARS-CoV-2 genome. Regular monitoring of the virus allows early identification of emerging variants and allows researchers to identify the associated mutations.

“Although the genomic surveillance in Europe and the USA is fairly strong it is becoming clear there are large areas of the world that we simply have no idea what variants are circulating. These are starting to appear in Europe as imports or community outbreaks. Better surveillance across a broader range of countries would allow us to better risk assess what the next stage of the pandemic might look like,” said the authors. “If we want to monitor the ongoing emergence, spread, and import of potential vaccine escape mutants we have to continue this effort or risk further pandemic waves and vaccine failure. Furthermore, understanding the genomic epidemiology of the virus as early as possible will allow us to rapidly develop updated vaccine boosters.”

Professor Alain Kohl, Deputy Editor-in-Chief of the Journal of General Virology said “The emergence of SARS-CoV-2 variants is one of the great challenges in the ongoing pandemic. This review article summarises our current knowledge and understanding of the evolution of the virus, as well as the consequences – for example in terms of vaccination. It is of great interest to anyone wishing to learn more about the history of this virus and what the future may hold.”

Our principal goal is to develop, expand and strengthen the networks available to our members so that they can generate new knowledge about microbes and ensure that it is shared with other communities. The impacts from this will drive us towards a world in which the science of microbiology provides maximum benefit to society.