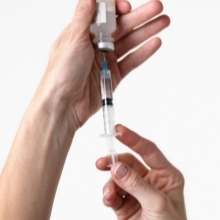 Infection with high-risk human papillomavirus (HR HPV) types 16 and 18 is responsible for around 70-80% of cervical cancers. A study conducted by Public Health England and presented today at the Society for General Microbiology's Annual Conference shows a reduction in these two HR HPV types – which are included in the HPV vaccines used – in sexually active young women in England.

Between 2010 and 2012, over 4,000 samples were collected from young women receiving a chlamydia screen as part of the National Chlamydia Screening Programme in England. Prior to the HPV immunisation programme introduction, a survey showed around 1 in 5 sexually active women aged 16 to 18 were infected with at least one of the two HPV types included in vaccines. A similar survey conducted following the introduction of the programme showed the prevalence had dropped to 1 in 15 young women.

Each year around 2,000-2,500 women are diagnosed with cervical cancer in England, the most common cancer in women under 35. David Mesher, Public Health England, presenting the work at the conference, said: "This study provides an early indication that the national HPV immunisation programme is successfully reducing vaccine-type HPV infections in sexually active young women in England, and also suggests herd-immunity may be benefiting non-vaccinated young women and men.

"The data provide reassurance that the high efficacy against HPV infection in women reported in clinical trials can be effectively realised in practice, and in a programme achieving high coverage amongst young females. These data adds to our confidence that the HPV immunisation programme will achieve its aim of reducing cervical cancer."