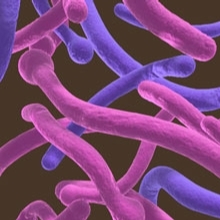 Candida albicans is a common fungus found living in, and on, many parts of the human body. Usually this species causes no harm to humans unless it can breach the body’s immune defences, where can lead to serious illness or death. It is known as an opportunistic pathogen that can colonise and infect individuals with a compromised immune system. New research, presented today at the Society for General Microbiology’s Autumn Conference, gives us a greater understanding of how mucosal surfaces in the body respond to C. albicans to prevent damage being done during infection.

Researchers from King’s College London focused on oral epithelial cells, a mucosal layer of cells that line the mouth, providing a barrier against microbes. The group challenged oral epithelial cells grown in vitro with C. albicans, looking at gene expression six and 24 hours after infection.

The results showed that a molecular signalling pathway know as the ‘PI3 Kinase pathway’ is activated as soon as five minutes after the epithelial cells encounter C. albicans, before the fungus has time to become invasive. This pathway seems to be involved in priming epithelial cells to protect against future damage. Inhibiting the PI3 Kinase pathway increased the amount of damage caused by C. albicans and reduced the normal tissue healing response.

This finding makes the PI3 Kinase pathway an attractive target for new therapeutics against C. albicans. Dr David Moyes, who presented the work at the conference, hopes that by boosting the activity of the pathway it may be possible to reduce the fungus’s ability to cause tissue damage.

He explains, “We are developing a complete picture of how C. albicans interacts with the epithelial cells that make up our mucosal surfaces and learning how they are able to discriminate between harmless and harmful microbes.

“Many of the symptoms of C. albicans infection, are caused by the body’s incorrect or overactive response to cell damage. Developing therapies that act on the patient, not the microbe, provides an entirely novel way of treating an infection and the likelihood of resistance is much reduced.”

Candida infections are the third most commonly acquired hospital blood-borne infection, resulting in 50,000 deaths annually. Over 75 per cent of fertile age women will suffer from at least one Candida infection and there are around 2 million cases of oral candidiasis each year among HIV/AIDS patients.