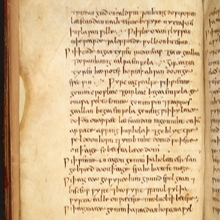 Researchers from the University of Nottingham have shown that a 1,000 year old Anglo-Saxon remedy for eye infections, which originates from a manuscript in the British Library, has been found to kill the modern-day superbug MRSA. This work is being presented this week at the Society for General Microbiology Annual Conference.

Microbiologist Dr Freya Harrison, working with Dr Steve Diggle and Dr Aled Roberts, collaborated with Dr Christina Lee, an Anglo-Saxon expert from the School of English, to recreate a 10th century potion for eye infections from Bald’s Leechbook. The book is widely thought of as one of the earliest known medical textbooks and contains Anglo-Saxon medical advice and recipes for medicines, salves and treatments.

The team has shown that Bald’s eye salve kills up to 90% of meticillin-resistant Staphylococcus aureus (MRSA) bacteria in in vivo wound biopsies from mouse models. They believe the bactericidal effect of the recipe is not due to a single ingredient but the combination used and brewing methods/container material used. Further research is planned to investigate how and why this works.

The recipe calls for two species of Allium (garlic and onion or leek), wine and oxgall (bile from a cow’s stomach). It describes a very specific method of making the topical solution including the use of a brass vessel to brew it in, straining to purify it and an instruction to leave the mixture for nine days before use.

Dr Harrison explained: “We thought that Bald’s eye salve might show a small amount of antibiotic activity, because each of the ingredients has been shown by other researchers to have some effect on bacteria in the lab – copper and bile salts can kill bacteria, and the garlic family of plants make chemicals that interfere with the bacteria’s ability to damage infected tissues.  But we were absolutely blown away by just how effective the combination of ingredients was.  We tested it in difficult conditions too; we let our artificial infections grow into dense biofilms, where the individual cells bunch together and make a sticky coating that makes it hard for antibiotics to reach them.  But unlike many modern antibiotics, Bald’s eye salve has the power to breach these defences.”

Dr Steve Diggle added: “When we built this recipe in the lab I didn't really expect it to actually do anything. When we found that it could actually disrupt and kill cells in S. aureus biofilms, I was genuinely amazed. Biofilms are naturally antibiotic resistant and difficult to treat so this was a great result. The fact that it works on an organism that it was apparently designed to treat (an infection of a stye in the eye) suggests that people were doing carefully planned experiments long before the scientific method was developed.”