Stomach bacteria switch off human immune defences to cause disease 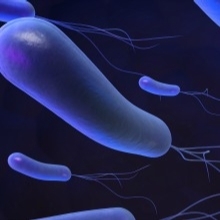 Helicobacter pylori is a bacterium that establishes a life-long stomach infection in humans, which in some cases can lead to duodenal ulcers or stomach cancer. New research, presented today at the Society for General Microbiology’s Autumn Conference, gives us a clearer understanding of how these bacteria can manipulate the human immune system to survive in the mucosal lining of the stomach.

Researchers from the University of Nottingham have shown that H. pylori is able to supress the body’s normal production of ‘human beta defensin 1’ (hβD1), an antimicrobial factor present in the stomach lining that helps prevent bacterial infection. By collecting stomach tissue biopsies from 54 patients at the Queens Medical Centre, Nottingham, the team showed that patients infected with H. pylori had ten times less hβD1 than uninfected patients. Those with the lowest amount of hβD1 had the most bacteria present in their stomach lining.

The most damaging strains of H. pylori make a molecular syringe called the cagT4SS, through which bacterial products are injected into cells of the stomach lining. In vitro work using human gastric epithelial cell lines showed that this activates chemical pathways to suppress hβD1 production. These activated pathways are also involved in the stimulation of an inflammatory response, meaning that these H. pylori strains are able to survive and colonise more abundantly, while continuing to cause tissue damage over many decades. Previous research suggests that chronic inflammation of the stomach lining is strongly linked to gastric cancer.

It is estimated that half of the world’s population have H. pylori in the mucosal lining of their stomach. For most people the infection is asymptomatic, although 1-2 per cent of those infected will develop gastric cancer. Survival rates for this disease remain low, as diagnosis is often very late, when the cancer is at an advanced stage.

Katie Cook, who is presenting this work says, “To identify people who are likely to suffer from stomach cancer we need to understand how H. pylori interacts with the cells of the stomach lining. Because our research is patient-focused we know that our findings are directly relevant.

"We hope to combine this work with that being carried out by our colleagues in order to develop a diagnostic test to predict the future risk of gastric cancer development."