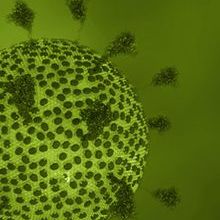 In a paper published in The Journal of General Virology today, researchers at The Pirbright Institute have confirmed that SARS-CoV-2 variants are able to gain entry to cells of more species than the original virus.

The original SARS-CoV-2 wildtype virus, which emerged in China in 2019, is understood to have come from bats, but since then there have been multiple reports of infections of other species, from pet dogs to mink and deer. In their recent paper, the Pirbright team have confirmed that the emerging variants of the virus that have arisen throughout the COVID-19 pandemic are better able to enter cells expressing the receptors of other species than the original wildtype virus.

SARS-CoV-2 enters cells by binding to a receptor, called the ACE2 receptor, which sits on the outside of cells and, when attached to by SARS-CoV-2, gives the virus access to move into the cell, almost like a key opening a lock. Once inside, the virus can begin to try to replicate.

So far, all identified variants of SARS-CoV-2 have been found to have changes in the protruding spike-like part of the virus that binds to the ACE2 receptor, and scientists have been studying these changes to monitor changes in the behaviour of new variants.

In their paper published today, the research group has used a new combination of species ACE2 receptors and a wider range of variants than before. Testing mice, rats, ferret, hamster and civet receptors, they were able to conclude that changes in the spike protein of SARS-CoV-2 variants are able to gain entry to cells expressing a wider range of species receptors than the original virus. This is important as we want to know which animals are at risk of getting ill, and which species are at risk of becoming a new reservoir for the virus, possibly leading to new variants.

Dr Dalan Bailey, corresponding author on the paper explained another reason this research is essential. ‘It’s really important to understand the mechanism of how SARS-CoV-2 gains entry to cells to make sure we’re using the right animal models when testing in the lab. Our results support the current models being used, but it’s important to know that you’re using the right species.’

The research has been funded as part of the G2P Consortium, a national research project studying emerging variants of SARS-CoV-2. But why study the activity of the virus in other species?

“Variants of the virus have to adapt when they reach new species and improving our understanding of what those adaptations are is helpful,” Dr Bailey explains. “But it’s not the whole story. The entry into the cell is just one step. There are some species that the virus can get into the cells of but can’t replicate, or cause illness. That’s harder to understand, and the G2P Consortium is working together to try and figure out why that is.”

Professor Wendy Barclay, co-author of the paper and Head of Department of Infectious Disease and Chair in Influenza Virology at Imperial College London, spoke today at the Microbiology Society’s Annual Conference in Belfast about how prepared we are for future pandemics. Professor Barclay agrees on the benefits of collaborative groups like the G2P Consortium. “I think one of the only good things to come out of the COVID pandemic is that people really have worked together… People working together is going to be essential for those rapid responses we need.”