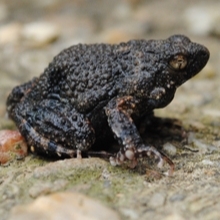 Today, at the Microbiology Society’s Annual Conference in Liverpool, scientists will show that the foam made by Trinidadian frogs represents a new, non-toxic antibiotic delivery system that may help to prevent infections.

While mating, Tungara frogs (Engystomops pustulosus) release a protein cocktail that they beat into a foam with their back legs. The frogs – less than 5 centimetres long – lay their eggs in these foam nests to protect them from disease, predators and environmental stresses.

Researchers from the University of Strathclyde have been analysing the frog foam, showing that it is highly stable and capable of taking up drugs before releasing them at a stable rate. The group’s work reveals that the foam can release model dyes at a steady rate over a period of 72–168 hours, while foam loaded with the antibiotic vancomycin was shown to prevent in vitro growth of the pathogenic bacterium Staphylococcus aureus for a period of 48 hours. The foam proteins were tested in vitro against keratinocytes, a type of skin cell, for 24 hours. These cells were still alive and viable after 24 hours of exposure, demonstrating that the foam is not toxic to human cells.

Sarah Brozio from the University of Strathclyde, who undertook the research, said: “Foams are usually very short-lived so they’re not considered for long-term drug release, even though they have great potential for topical treatments. This foam comes from a tiny frog and yet offers us a whole new approach that could prevent wound infections, and with increasing antibiotic resistance it’s important that all new tactics are explored. ”

Currently, the team have engineered E. coli bacteria to produce two of the foam’s protein constituents, including Ranaspumin-2, which on its own produces a short-lived foam that is also non-toxic to human cells. The researchers are working to produce a completely synthetic form of the foam that is as stable as the frog-produced version.

Drug delivery systems that target specific areas of the body improve treatment for patients and can reduce side effects. The group envisages that the foam’s long-lasting, durable characteristics could be used to treat severe burns, which frequently become infected and require the use of intravenous antibiotics.

Dr Paul Hoskisson, who leads the research team, said: “Foams are unusual in nature and are typically made of inactivated proteins, yet this foam is stable and importantly compatible with human cells, making it potentially ideal for pharmaceutical applications. While foams like these are a long way from hitting the clinic, they could help in burns and wound treatment, providing support and protection for healing tissue and delivering drugs at the same time – all from a humble little frog.”