What can be learned from the microbes on a turtle’s shell? 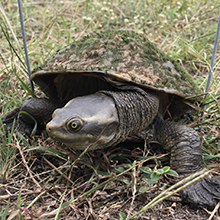 Research published in the journal Microbiology has found that a unique type of algae, usually only seen on the shells of turtles, affects the surrounding microbial communities.  It is hoped that these findings can be applied to support the conservation of turtles. Previous research has shown that a diverse microbiome can protect animals against infections.

The research aimed to understand how the microbiome – a complex community of micro-organisms – varies around the body of Krefft’s river turtles. Samples were assessed from inside the mouth, the top of the head and parts of the shells of six turtles collected from Ross River in Queensland, Australia.

The research team, based at the University of New England and James Cook University, then used a technique called high-throughput sequencingto identify which micro-organisms were present on the turtles, using DNA sequencing to determine which bacteria are present, and their abundance.

Previous research has shown that animals in captivity often have less diverse microbiomes, which could affect their long-term health. Dr Donald McKnight, who led the research, said: “Successful conservation efforts inherently require a thorough understanding of an organism’s ecology, and we are increasingly realising that microbiomes are a really important part of host ecology. So, filling that gap in our knowledge is important, particularly for animals like turtles.

“Turtles are one of the most imperilled groups of animals. Nearly two-thirds of all turtle species are either threatened or endangered, and efforts to conserve them often involve breeding turtles in captivity or collecting eggs from wild turtles and raising them in captivity until they are large enough to be released. Studies on other animals have, however, shown that captivity can alter the microbiome.”

The results showed that the microbiome of the turtles’ shells varied, depending on whether algae was present. “It is really interesting that even something like the presence of algae can affect the microbiome” said Dr McKnight. “The algae on turtle’s shells is fascinating. It’s actually a unique genus that grows almost exclusively on turtles.”

The algae seen on turtles’ shells has many important roles, including providing camouflage and acting as a home for small crustaceans and dispersing seeds. “Our study adds to those roles by showing that algae also affects the microbiome. The mechanism through which it affects the microbiome isn’t clear yet, but there are several possibilities. For example, it might compete with some bacteria in order to access the turtles’ shells. It may also provide a habitat for bacteria that don’t grow well on just the shell itself. Another possibility is that it could retain moisture while turtles bask, and that could affect which species of bacteria grow well. Our study is just an early step in understanding turtle microbiomes, but hopefully future work will build on it and test some of these possibilities.” said Dr McKnight.

It is important to understand what the microbiome looks like on all parts of the turtle, according to Dr McKnight. He said, “Studies on other animals, including humans, have often found that different parts of the body have different microbiomes. So, it makes sense that this would be true for turtles as well, but it is still really important to test these things rather making assumptions

“We don’t really know how this affects the success of efforts to conserve turtles by raising them in captivity and releasing them, but it could be an important part of the puzzle. Our study contributes to this by documenting the microbiomes of wild turtles, so that we have a baseline to compare to. More studies are needed to look at whether captivity affects microbiomes in turtles and how those shifts affect conservation.”

Dr McKnight hopes to continue to research turtle microbiomes: “We are in the early stages of looking at how various environmental and demographic factors affect turtle microbiomes. For example, we want to see if they shift seasonally, if diet affects them, and if different ages and sexes have different microbiomes.”