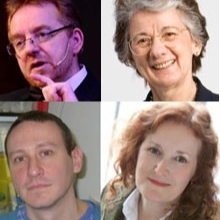 Congratulations go to the microbiologists who have been awarded this year's Society Prizes. They include Professors Rita Colwell, Nikolay Zenkin, Laura Piddock and Stephen Curry.

The Prize Winners will be presenting their lectures at the 2014  Society for General Microbiology Annual Conference. The Conference will be held at the ACC Liverpool, 14-17 April.

Awarded to an outstanding microbiologist who is a global leader in their field and whose work has had a far-reaching impact beyond the discipline of microbiology.

Awarded to an early career researcher who has achieved an outstanding research record within 12 years of being awarded their PhD.

Awarded to an individual who has made exceptional contributions to the discipline of microbiology.

Lecture: Understanding the basis of antibiotic resistance as a platform for early drug discovery at 12:10 on Tuesday 15 April.

Awarded for outstanding contribution to microbiology education and/or communication in order to stimulate interest and understanding.

Lecture: Science communication: a communicable disease? at 17:35 on Monday 14 April.