A grave situation – the antimicrobial properties of churchyard lichens 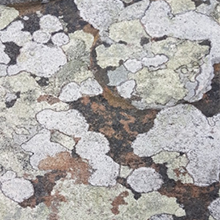 Approaches to drug development have been largely focused on microbial secondary metabolites from bacteria like Streptomyces. However, with the emergence of multidrug resistant pathogenic bacteria and fungi, researchers are looking to alternative areas as sources for novel antimicrobial compounds.

Dr Judith Taylor of the Open University (@OU_EEE), is working with MSc student Toscane Fourié (Cranfield University) and has highlighted the wide range of unique defence chemicals produced by lichens, saying “I noticed the antimicrobial action of lichens growing and competing for substrates alongside each other on common churchyard gravestones and considered that perhaps ‘chemical warfare’ was going on between different colonies of adjacent lichens, albeit very slowly.” Historically, lichens have been used in traditional medicines, most commonly to treat wounds, skin, respiratory and gastric disorders. This historic medical use – and the wide range of chemicals they produce – led Dr Taylor and Toscane to research their antimicrobial potential.

Lichens are composite organisms, formed when a photobiont – an algae and/or cyanobacteria – create a stable, symbiotic relationship with a fungus. The composition of the relationship is not known, but it is thought that the photobionts provide the fungus with simple sugars produced by photosynthesis, and the fungus provides the photobionts with shelter and optimal living conditions.

Ten common lichen species were selected from a churchyard in Buckinghamshire and were identified by Mark Powell from the British Lichen Society. The antimicrobial properties were assessed by creating dried extracts of the ten species and testing them against six bacteria and two fungi; including some of the more challenging healthcare associated pathogens, Pseudomonas aeruginosa, Staphylococcus aureus and Salmonella typhimurium.

Of the ten lichen species tested, two species; Diploicia canescens and Pertusaria amara, showed the most potent antimicrobial activity. Dr Taylor is planning on using more sensitive techniques to further analyse the antimicrobial effects found in this study, eventually testing them against a wider range of medically important pathogenic bacteria and fungi. Dr Taylor has hope, saying “while the agents may or may not be novel to medicine, they could still be of medicinal interest.”