A tribute to Pauline Meadow 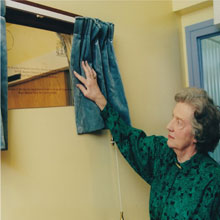 The Microbiology Society pays tribute to Pauline Meadow, the first female Editor-in-Chief of Microbiology and a long-standing member of the Society who also served on Council.

In memory of her work and her passion for the discipline of microbiology, we are publishing excerpts from a recent interview with her, where she reflected on her education and career as part of our celebrations of the 75th anniversary of Microbiology which will take place in 2022.

Pauline said: “I was born on 5 March 1930, the first child of Sam (an accountant) and Doris (who had been a gym mistress). The latter was very unusual then. I was the only person at school with a mother who had worked outside the home. I wanted to be an accountant like my father but he said no man would ever trust a woman with his money – true in those days – so I chose science, chemistry, and got a scholarship to go to Oxford. Despite having Dorothy Hodgkins as my personal tutor, I did not enjoy the subject. I was one of eight girls among one hundred men in my year. It was possible to take Biochemistry or Pharmacology as a supplementary subject. This did not contribute to the class of the degree but enabled me to learn a new subject.

I chose Biochemistry and was lucky enough to work with Donald Woods who had been one of Marjory Stephenson’s pupils in microbiology, a subject which I found fascinating. Donald invited me to stay in Oxford and take a PhD. However all my friends were going to London (to which I had never been) so I chose to go there and work with Robert Knox, Bacteriologist, at Guy’s Hospital Medical School. There I was, only one of two women in the staff dining room. I met my husband, John Enticknap, there and went to the Biochemistry Dept at UCL as a lecturer. Bob Murray, Professor of Microbiology in London, Ontario, wrote to ask if I could take Susan Koval, one of his students, as a technician. She and her husband came over and both completed PHDs in London. Susan caused me to read the JGM and take an interest in the Society. I became a member of Council and eventually Editor-in-Chief of the Journal.”