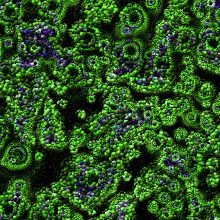 Research has found that Salmonella biofilms rapidly develop resistance when treated with antibiotics, but with this sometimes comes a trade-off: they do not grow as effectively.

How biofilms respond to antibiotics is currently poorly understood. To combat this, research led by Dr Eleftheria Trampari with Dr Mark Webber investigated how biofilms formed by Salmonella Typhimurium evolve in response to three antibiotics often used in clinical settings.

The research, conducted at the Quadram Institute in Norwich, compared the effects of three clinically important antibiotics on biofilms and on free-living bacteria. They observed how the bacteria in biofilms evolved in response to antibiotics and sequenced their genomes to understand the mechanisms behind the adaptations.

When exposed to various antibiotics, Salmonella Typhimurium biofilms rapidly evolve resistance mechanisms to protect the bacteria. In doing this, however, the biofilms do not form as effectively, leaving bacteria exposed to the immune system and further antimicrobial challenges. Dr Trampari said, “In order for bacteria to resist certain drug treatments, they sometimes sacrificed important traits that increase their survival potential in the real world.

One of the unique characteristics that makes bacteria harder to kill is their ability to form biofilms. We know that growing in a biofilm protects against antibiotics. However, some of our resistant mutants actually formed very poor biofilms.”

Biofilms occur when communities of bacteria group together and adhere to a surface; the surface can range from medical instruments to tissues, teeth or skin. Once formed, biofilms act as a shield against antibiotics and the immune system, meaning infections can become very difficult to clear.

Dr Trampari found two changes in a protein called AcrB, which is a multidrug efflux transporter. This protein sits within the cell membrane and actively pumps antibiotics out of the cell. The researchers think the changes identified improve AcrB’s ability to remove drugs from within the cell. She said, “It is possible that our observations could also be translated to other organisms. However, we have to keep in mind that every organism responds to antimicrobial stresses in different ways, which sometimes are hard to predict. More experimental-based studies are essential to shed light to this problem, with the combination of experimental evolution and whole genome sequencing being valuable tools in this battle.”

Experiments like this, which examine how bacteria evolve in response to environmental changes or antibiotics, could be useful in the future. Dr Trampari hopes that this technique can be used to help tackle the rise of antimicrobial resistance in a number of settings, including medicine, food production and veterinary medicine. She said, “Experimental evolution helped us identify and characterise novel mechanisms of resistance and increased our understanding of how bacteria respond and adapt to antimicrobials. Strikingly, we were able to track some of these lab-identified adaptative changes down in strains isolated from the real world. This, we believe, gives an exciting potential for the use of bacterial evolution studies for the prediction of antibiotic treatment outcomes and for educating future treatment strategies, in clinical or other relevant settings.”

Dr Trampari will present her data during the Microbiology Society Focused Meeting ‘Microbes in Medicine: A Century of Microbiology at Trinity College Dublin.’ Her talk, titled ‘Experimental evolution selects clinically relevant antibiotic resistance in biofilms but with collateral tradeoffs,’ will take place at 10:00 on Thursday 24 October.