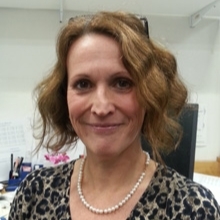 In recent weeks there has been a number of news reports covering an outbreak of H5N8 avian flu (also known as bird flu), which has lead to the mass culling of poultry at farms in Germany, the Netherlands and the UK. The World Health Organization has also been notified of three new human cases of a different avian flu strain found in China, H7N9, one of which has been fatal. But what is avian flu? Is it something we should be worried about? To find out more, we spoke to Wendy Barclay, Professor of Influenza Virology at Imperial College London.

What are the different strains of flu? Why do they have different numbers, such as H5N8?

There are three species of influenza: Influenza A, Influenza B and Influenza C. The first two (A and B) cause seasonal flu in humans. Influenza A viruses are widespread in birds like ducks and geese. In the birds there are many different subtypes of flu viruses that are classified according to the glycoproteins – proteins with a sugar molecule attached – that are found on the surface of the flu virus.

The letters H and N stand for haemagglutinin and neuraminidase, respectively. When a flu virus comes into contact with a target cell, such as the ones found in your lungs, haemagglutinin acts as a ‘molecular key’, allowing the virus to bind to, and enter, the cell. Once a cell has been infected, neuraminidase allows newly replicated viruses to escape and go on to infect other cells.

These surface glycoproteins are separated into numbered groups, which are the numbers you see in the names of the flu viruses. Only viruses with H1, H2 or H3 have circulated in humans in the past 100 years, whereas the numbers up to, and beyond, H18 in birds and bats. Antibodies against one subtype, say H1, don’t cross-protect against another, perhaps H7, – this means that the human population has no residual immunity against the bird influenza viruses. Luckily, the bird viruses can’t easily infect or transmit between people because they are not well matched for the human host.

What do we know about the H5N8 strain?

It’s an avian flu that can kill chickens, turkeys and, surprisingly, ducks, which are often unaffected by these types of flu (although farmed ducks are probably more susceptible than the wild ducks that usually carry the virus). Looking at the genetic sequence of this virus, I think there is a consensus among flu researchers that this strain is not likely to be harmful to humans – it should remain locked in bird species and not cross the ‘host-range barrier’ that separates human from avian flus.

So you can tell from looking at the genome of an avian flu virus how likely it is to infect humans?

You can make educated inferences these days, but of course we still don’t understand everything about flu viruses, even when the genetic sequence is available.

The reason I’m fairly confident that the current H5N8 virus is not a problem for human health is that this type of virus has been around in Korea and Japan for some years prior to the recent outbreaks in Europe. To date, no one has reported any associated human cases. This is also typical of the flu viruses that infected poultry houses in the early 1990s. These viruses are out there in the wild bird populations and emerge in farmed animals every now and then – they can be highly pathogenic to the birds, but not to farmers or the people involved in culling them, although these workers should still wear protective gear of course.

This is different from the situation we’ve faced with H5N1, an avian flu that emerged in 1997 in Hong Kong. This virus caused poultry to die, but also the humans who were exposed to them by, for example, buying live birds at the poultry markets. This was really the first time scientists realised that a species of avian flu could jump directly from birds to humans. Researchers believed that the species barrier was too large and that an intermediate host – perhaps a pig – was needed, in which a process known as ‘reassortment’ could occur. Inside the intermediate host human flu viruses and avian flu viruses get the chance to mix, creating a chimeric virus that’s better able to infect humans, which is how the pandemics of the 20th century have occurred.

However, more recently we have begun to understand that this mixing up of bird and human influenza virus genes is not sufficient to make a pandemic virus. The new haemagglutinin molecule derived from the bird virus must also undergo some specific mutations that allow it to bind better to human cells – working as a more efficient key to unlock a cell for virus entry. Thankfully for us, although the H5N1 bird flu can directly infect humans, it is currently unable to be passed between humans because it has not acquired the adapting mutations that allow it to do so.

What about H7N9? There hasn’t been much media coverage of it in the UK but it was recently reported to have recently killed someone in China who had, according to the World Health Organization, ‘a history of exposure to a live poultry market’.

H7N9 is another avian flu that got into chickens from wild birds. Like H5N1, this virus seems able to infect humans but cannot be transmitted from person to person. People who get infected with H7N9 fare very badly; the virus has around a 40% mortality rate, similar to H5N1’s 60%. The World Health Organization are rather concerned about this new strain of bird flu; it was first noticed in 2013 and returned in 2014. We’re just starting to see the first few cases of H7N9 for the winter 2014/15 season, which should peak in January, when it’s coldest in the east of China and the viruses can survive best. The chances of getting infected, and potentially passing the virus on, are higher when there’s more of it around.

If this is the third time that H7N9 has returned, why are we not vaccinating against it?

We don’t vaccinate against any avian flu virus, we only vaccinate against the four strains of flu that are human specific and return as seasonal flu every year: two influenza type A viruses H1 and H3 and two influenza type B viruses. These strains are already transmitted from person to person and are true human viruses. With avian flu, we’ve only had about 450 people infected with H7N9, and between 600 and 700 who have been infected with H5N1. You can’t justify the cost of manufacturing and rolling out a vaccine for a virus that may never cause a serious health threat to humanity. We’re better off saving our resources for when we really need them.

Why are some flu strains more concerning than others?

For a flu strain to be able to infect a huge number of people, several things need to happen: you need to have a lot of virus about; the virus has to be good at replicating in mammalian cells, where new mutations can occur; and there must be a big pool of people who don’t have any pre-existing immunity to the virus and can incubate and spread it among themselves.

Lots of flu viruses come out of Southeast Asia because of the close proximity of humans and animals. However, we still don’t completely understand which viruses pose the greatest risk of sparking the next pandemic, and of course the 2009 pandemic took a lot of people by surprise, as it didn’t come directly from birds at all but from pigs.

My colleagues and I have just published a paper in Bioessays explaining how we think that when a virus becomes highly adapted to poultry – like H5N1 has – it goes down an evolutionary path that makes it very good at killing chickens, but makes it more difficult to transmit between humans.

Is avian flu something we should be afraid of?

If you look at the four editions of the UK Government’s National Risk Register of Civil Emergencies – which compares how likely something is to happen with how bad it will be if it does – pandemic flu has appeared in every edition and is one of the highest rated risks. But with that said, it’s really difficult – you need to be careful about crying wolf. I don’t think the public should be worried about the odd report here and there of avian flu on a farm. However, these viruses are clearly awful for farmers, who face serious financial problems if their bird flocks have to be destroyed as a result of an avian flu infection.

While it’s important that we don’t raise the alarm unnecessarily, it’s equally important that we keep undertaking surveillance and funding research to detect any worrying strains as quickly as we can and to better understand how these viruses work. We also need to fund work into developing vaccines that are efficient. Current research suggests that human vaccines against avian flu produced in the ‘old-fashioned’ way using chicken eggs are not as effective as they might be. If there is an outbreak we might have to use a different strategy to mass-produce a more potent vaccine to protect people against a newly-emerged pandemic flu.

Of course, as I’ve mentioned, there are four strains of human seasonal flu, which can cause serious illness particularly in the very young or the very old. Effective vaccines exist for these and are available, for free, to specific groups in the UK. The flu jab given as an injection in the arm to elderly people and other adults like health care workers is only a fragment of the virus, known as an activated vaccine. A lot of people think they can get flu from having this vaccine but that really isn’t true. However, they might get a sore arm as the vaccine drives their immune system to make protective antibodies.

A new approach in the UK is vaccination of young children, who get a live attenuated influenza vaccine. This is delivered as a nasal spray, rather than an injection, which results in a mild, symptomless infection as the virus has been weakened. This type of vaccine works really well and can protect against more strains than the injected vaccine. Because we think that children are responsible for a lot of the spread of the flu virus in the community it is hoped that the new vaccination policy will impact not just the children themselves but also their families, especially elderly or susceptible relatives.