Bacteria found on common UK trees may act as a sink for air pollution, research finds 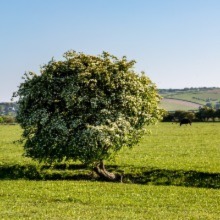 Bacteria found on the leaves of common UK tree species may remove toxic carbon monoxide (CO) from the air, according to researchers from the University of Warwick, UK.

CO is found in small amounts throughout the atmosphere, produced by incomplete burning of fossil fuels, as well as from natural processes. It is toxic to humans, and as an air pollutant it can lead to poor health outcomes, including higher rates of heart failure and lower average birth weights in areas with higher CO concentrations. “Elevated concentrations of CO over a longer term, even if they’re relatively low, have an effect on health,” said Hendrik Schäfer, Professor of Microbiology at the University of Warwick, “Air pollution is known to be a really important factor in morbidity, making people ill and leading to premature deaths.”

Whilst scientists already know that there are CO-degrading bacteria in soil, Professor Schäfer and his co-worker Jess Palmer wanted to explore whether the same was true for microbial communities living in the above-ground areas of trees, called the ‘phyllosphere’.

The researchers took leaf samples from holly and hawthorn trees and washed them in a buffer solution to dislodge microorganisms. After sealing the microorganism samples inside an air-tight bottle along with CO, they found that the toxic gas gradually disappeared, suggesting the presence of CO-degrading bacteria. They then extracted the microbial DNA, paying particular attention to the coxL gene, which codes for part of the enzyme responsible for degrading CO. They found that a wide range of the bacteria contained the gene for this enzyme, meaning they had the potential to break down CO from the atmosphere.

Attempting to quantify CO-degrading bacteria in trees, the researchers also explored public databases of phyllosphere metagenomes, containing the genetic sequences of entire microbial communities. They compared the number of coxL genes with the number of ‘housekeeping genes’, which all bacteria need to survive. This gave a rough estimate that around one quarter of bacteria in the phyllosphere possess CO-degrading genes. “We were quite shocked, to be honest, by the number,” said Professor Schäfer, “25%, that’s a lot.”

The research demonstrates the important role microorganisms may potentially play, if they oxidise CO in the phyllosphere, in reducing air pollution, acting as a sink for CO in the biosphere. “[Microbes] probably contribute in different ways than we’ve previously realised to the degradation of CO in cities,” Professor Schäfer explained.

“Trees have an impact on air quality, perhaps not only because they produce oxygen and they draw down carbon dioxide, but perhaps also because they are associated with microorganisms that may have an impact on other trace gases,” he said, “We may find unexpected potential benefits of trees that are rendered through microbial organisms.”

Professor Schäfer will present these findings at the Microbiology Society’s Focused Meeting, Microbial Cycling of Volatile Organic Compounds: Biogeochemistry to Biotechnology. His talk, titled ‘Are carbon monoxide-degrading bacteria in the phyllosphere a significant sink in the CO cycle?’, will take place at 11:15 on Thursday 26 May 2022.