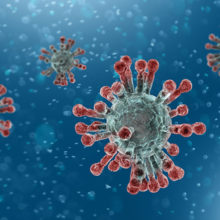 Our members are supporting the Science Media Centre and journalists with expert commentary and clear scientific analysis on the coronavirus outbreak originating in China. Here, Professor Paul Kellam (Professor of Virus Genomics, Department of Infection, Imperial College London) and Professor Paul Hunter (Professor in Medicine, The Norwich Medical School, University of East Anglia), explain more about what we know about this novel virus and efforts to control its spread.

“The outbreak and spread of the new coronavirus, 2019-nCoV is clearly very concerning. The information about the virus continues to accumulate quickly and maintaining such data sharing is crucial. This is not the first time a new coronavirus has infected and been transmitted between humans, both SARS and MERS coronaviruses have done this. The experience the world has gained in controlling these outbreaks in the past will be important to now control 2019-nCoV, especially rapid case detection.”

On how this outbreak compares to the SARS outbreak response:

“The first case of SARS (Severe Acute Respiratory Syndrome) was first identified in November 2002 in Guangdong Province, China. From 1 November 2002 to 31 July 2003 there were some 8,300 reported cases and 775 deaths. Case numbers started to increase throughout December and January, increasing more rapidly during the last week of January - first week of February 2003.  After a short-lived decline case numbers increased dramatically during March and April before eventually stopping in July of that year. That there may be a problem with an acute respiratory illness was first detected in the west late November and early December. The World Health Organization wrote to the Chinese authorities twice in the first two weeks of December to ask for further information but the reply from China apparently only concerned data on influenza cases. It was not until the 10 February that WHO was notified by the Chinese of 300 cases and five deaths in an outbreak of acute respiratory syndrome. WHO issues a global alert on 20 March after it had spread internationally. It was not until April that the virus responsible was finally identified.

By contrast in the current outbreak the first four cases were admitted to hospital on 29 December 2019. At that time the causative virus was not known but it was noted that all four had worked in the Huanan Seafood Wholesale Market. The following day these cases were widely reported by the Chinese authorities. On 8 January it was officially reported that the cause was a novel Coronavirus.

Since the SARS epidemic in 2002-2003 the response of the Chinese authorities has been very different. The authorities have been much more open about the outbreak, investigated the infection much more rapidly and thoroughly and shared that information with the international community. The authorities have also initiated very strong control measures in affected cities. The causative virus was also identified substantially earlier in this epidemic. As a result of this increased openness and better management in neighbouring countries should be able to prepare well in advance of any cases that may arrive on their shores.”

On the source of the virus:

“It is still not known with certainty and it may never be definitively proved. There are initial, although contested, reports that the virus has already been detected in both bats and snakes and the strains in both bats and snakes are similar to each other and to the strains from human cases. All the work around this new outbreak is new and ongoing which can explain why there are differing thoughts on what the source may be. There is still much more to find out about the virus and there is a real possibility that the exact origin may not be found.”

What has been happening already is that people have been comparing the gene sequences with those reported by scientists looking at viruses in animals (see previous answer). This is probably as good evidence as we will get. Ideally, we would like to isolate the virus from food animals in the market but it is likely that the infected batch of animals are long gone. However, the big question is no longer where it came from but how and where it is spreading in human populations.”

Any cooked food is unlikely to be the source. I suspect the most likely transmission pathway would be from aerosols produced during handing of the live animals and during butchery and food preparation which would then be inhaled or contaminate surfaces which would then be touched by people. However, raw food is also a risk.”

Possible impact of the virus:

“A typical influenza epidemic can kill many tens of thousands and sometimes hundreds of thousands of people. Previous novel coronavirus outbreaks have caused the death of substantially fewer people (SARS killed about 800 people globally and MERS about 850). This new strain seems to be rather less lethal than the previous two outbreaks however, this could still change. All new outbreaks are worrying especially in the early weeks when it is not clear how the outbreak could progress. I think it unlikely that the Wuhan coronavirus will be cause a major public health issue in the UK in large part because of our existing health system.

If the outbreak developed into a pandemic with very large number of cases then it would be a very serious issue for us all. However, I doubt that this will happen, though we still do need to take the outbreak seriously and monitor the situation carefully.”