Does inflammation promote the growth of plague? 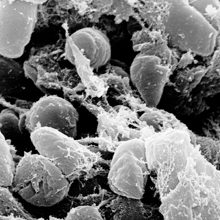 Researchers in the USA have been investigating ways to predict the survival of plague.

Plague is caused by bacteria called Yersinia pestis and is well-known for causing several mass-mortality events throughout history, including the Black Death which caused 50 million deaths.

By using mice lacking a certain signalling adaptor, researchers hope to investigate the immune response to plague infection and how this influences bacterial growth.

MyD88 is an important factor in the inflammatory response and is vital in helping the body respond to early invasion of bacteria. Dr Olson investigated the differences in survival, bacterial load, cytokines and tissue health of plague-infected mice with and without the MyD88 gene.

Although plague exists in animal reservoirs worldwide, some countries are more at risk of plague outbreaks. Peru, Madagascar and the Democratic Republic of Congo are the three most endemic countries. In May this year, a 14-year-old boy in Idaho​ was treated for bubonic plague, highlighting the importance of continued research into the disease.

Dr Olson will present her findings at the Microbes and Mucosal Surfaces Focused Meeting​ on Friday 22 June. The meeting will be held at The O’Brien Centre for Science, University College Dublin.