Does putting the lid down when flushing the toilet really make a difference? 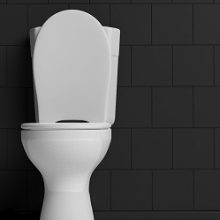 Research has found that flushing the toilet with the lid down could reduce airborne particles by as much as 50%. In addition to the visible drops of water that are generated upon flushing the toilet, smaller droplets that are just micrometres (µM) in diameter also form and are propelled into the surrounding air. These aerosolised droplets could contain faecal bacteria, such as E. coli, and spread disease.

Researchers at University College Cork assessed the airborne particles in a shared lavatory over a week. They used a bioaerosol sensor to continually monitor the number and size of particles as well as whether they were likely to contain bacteria.

The research found that putting the toilet lid down reduced the number of both visible and smaller droplets during and after flushing by 30-60%. However, use of the lid also increased the diameter and concentration of the bacteria in these droplets.

It was also found that airborne microdroplets were detected for 16 minutes after flushing the toilet with the lid down, 11 minutes longer than when the toilet was flushed with the lid up. The researchers suggest that this could be due to particles being re-aerosolised from surfaces rather than being created by the turbulence of the toilet flushing. Alternatively, the researchers suggest that airborne particles could stick together, or agglomerate, which would cause them to remain airborne for longer.

Other studies have also shown that use of the toilet lid reduces the spread of visible droplets which are produced when the toilet is flushed, but the physics of smaller particles is less well known. Human faeces can contain a number of disease-causing bacteria, including E. coli, Staphylococcus and Campylobacter. Identifying high-risk areas, such as hospital toilets, where additional infection control could be applied could prevent the spread of infections and improve healthcare outcomes.

His talk will take place at Federation of Infection Societies Conference 2019 (FIS 2019) in Edinburgh, taking place between the 11–14 November 2019.

Hosted by the Microbiology Society, FIS 2019 is a unique conference which includes the collaboration of 16 societies across the UK, with interests in different aspects of infectious diseases, clinical microbiology, biomedical science and infection control and provides a great opportunity to find out about the latest developments and to connect with key contacts and networks.

For more information about the event and to register to attend, visit the FIS 2019 registration page.