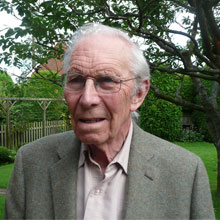 Dr Martin Cole joined the Society in the 1961. He has always been a keen advocate of microbiology research as a profession and would like to support those in the early stages of their careers to help them progress which is why he donated to the Unlocking Potential Fund.

“In 1952 I was awarded a State Scholarship and later a Research Studentship from the Department of Scientific and Industrial Research (DSIR), I won a State Scholarship to pay the fees to go to College [Royal College of Science, now part of Imperial College London] and had fantastic teachers and facilities. I had opportunities to go to labs at Rothamsted Experimental Station, John Innes Horticultural Institute and DSIR Ditton. I would like others to have the same opportunities to go to labs to learn from other scientists, as working in these labs broadened my experience. I also went to conferences and finding out about the work of others helped me decide where to take my career.”

Martin Cole has helped developed several medicines during his career that are prescribed daily, helping save countless lives. These include the antibiotics amoxicillin and flucloxacillin, which are semi-synthetic versions of penicillin. He also worked with Ernest Chain during the period when penicillin was rapidly upscaled for use across the world. He was part of the team that discovered a new compound called clavulanic acid, a beta-lactamase inhibitor that is often given alongside amoxicillin to fight antibiotic-resistant bacterial infections such as those caused by Staphylococcus and Escherichia coli bacteria. Augmentin, a drug that combines clavulanic acid and amoxicillin, Martin patented.

Martin has also developed medicines to combat viral infections during his career. He worked in the team that discovered famciclovir, which is widely prescribed to treat shingles and herpes simplex virus infections. He has also isolated microbial metabolites that have been used in insecticides to prevent diseases in plants for food security.

Martin wants to encourage early career researchers and help them progress which is why he decided to donate to the Unlocking Potential Fund.

“If you are going into research, be prepared for some ups and downs. Things don’t always work out, but you have to keep going. If something doesn’t add up, keep testing it. There may be disbelief, it may be the experimental technique, and possibly it may not be in accord with current thinking. Have the courage to confirm and try the experiments again. A key part of research is perseverance.

Another is communication and what you say to others. There are the written communications to set things out clearly and enthusiastically, and verbal communication is essential too. Clarity is vital. The point of research is to share and tell people your results. Negative results are also important. Science builds on what has gone before and is propelled by methodology.”

Martin is helping support the next generation of researchers to enable them to communicate and network with others so they can progress in their careers. They need your support too. By donating to the fund you can help support the people who might, in turn, one day provide solutions to global challenges and help them reach their full career potential.


Find out more about Dr Martin Cole and his career in our Q&A, first published in our member magazine Microbiology Today.