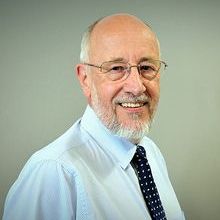 Professor Nigel Brown has been an active member of the Microbiology Society for a large part of his scientific career, having joined as a PhD student in the mid-70s. He served as President from 2012—2015 and from the beginning has been greatly supportive of microbiologists at all career stages.

“This is the career that never stops. It develops over time – now the microbiology I do is no longer bench research. I mentored and supervised students, I ran departments, and now I engage the public locally and try to support the Society. It all contributes to microbiology.”

Nigel started his career in a small lab, undertaking his PhD studies with a support network of other graduate students and a supervisor. He aspired to work in a larger lab and secured an ICI Postdoctoral Fellowship to work with Fred Sanger at the MRC Laboratory of Molecular Biology in Cambridge. The fellowship, which no longer exists, opened the door to learning from renowned scientists such as Francis Crick and Sidney Brenner.  The lab was internationally recognised, and Nigel recalls that during his two-year stint in the lab, work was being undertaken that would contribute to five Nobel Prizes.

Nigel spent much of his research career investigating how metal resistance, including to mercury, zinc and lead, is regulated in bacteria and how bacteria manage copper. He became a lecturer; the opportunities he had seized so far in his career were excellent, but one thing that was missing, and that many early and mid-career researchers will relate to, was guidance, “I had no mentorship in my first independent career, people just told me to get on with it, whatever 'it' was”. He realised to advance he needed to take a calculated risk and apply to the Royal Society for a fellowship. This was risky because there was no guarantee of a position after the five years were up, a situation that many researchers today will understand as grants are often even shorter. When asking for sign-off from his Head of Department, Nigel did not receive much support and instead was advised to measure his expectations. However, the application was successful, and Nigel says that “it was the transformative step, which made the difference. I could focus on my research, and it allowed me to become well-known in my relatively limited field”.

After a research career that included a move to being a Chair at the University of Birmingham via a year’s sabbatical in Australia, twice becoming a Head of Department and other academic ventures, including a Leverhulme Research Fellowship, Nigel made a move to become the Director of Science and Technology at the BBSRC.   This changed the way he interacted with the scientific community, as he moved from receiving grants to giving them. The move gave him invaluable insight into the way funders worked. He spent four years working with the other research councils and chairing national committees.  Nigel moved on to become the Vice Principal of Science and Engineering at the University of Edinburgh after which he officially retired and unofficially continued to support the work and careers of others.  Nigel still consults for UKRI, the umbrella organisation for the research councils, and has chosen to donate the fee for his recent work on the Future Leaders Fellowship panels to the Unlocking Potential Fund.  He has also included a small legacy to the Society in his will.

The most significant obstacle to Nigel’s career was a “total lack of mentoring”. While he was lucky to have had supportive colleagues, he realised he did not have someone to provide guidance for specific challenges. By taking calculated risks, to apply for fellowships and to make the jump to the BBSRC, he was able to broaden his network, meet more senior people and understand the wider environment outside his institution. Nigel recognises that he was lucky to work in a field that was of great interest at the time because of its biotechnology applications – it was possible to get grants and make an impact on his field without mentoring. He thinks this will be the key benefit of the Unlocking Potential Fund – members will be able to find guidance, broaden their network and find the opportunities that will fit their career aspirations. He also acknowledges the role of the Society in gaining that support himself, meeting senior members, including Pat Clarke FRS, at conferences and honing his presentation and research skills through feedback.

As a donor and the Chair of the Fundraising Working Group, Nigel hopes that the funds raised will help early and mid-career members to be empowered to make decisions to reach their career goals. His advice to early career researchers wanting to pursue a career in academia is to be “absolutely sure that this is the career you want to follow. That has to be a given, it’s much more difficult than it was before.” There are other, non-academic careers for microbiologists.  He hopes that the Unlocking Potential Fund will help early career researchers to obtain career clarity. He also suggests that researchers should be bold: “take a calculated risk from time to time. Some risks come off, some don’t, so make sure you also have a fall back”.

Nigel wanted to invest his fee for working with a research council back into the career development of early and mid-career researchers. By empowering them, he will help to unlock their potential and address global challenges. Join Nigel today by donating to the Unlocking Potential Fund.