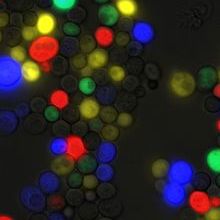 Researchers are unravelling the mechanisms behind the increasingly common fungal disease mucormycosis.

Mucormycosis is the third most common invasive fungal infection in people and has increased in recent years due to an association with COVID-19. In an effort to identify treatment strategies for mucormycosis, Harlene Ghuman and colleagues at the University of Birmingham researched how fungal spores interact with blood cells during infection.

Thrombosis is a hallmark of mucormycosis. This is the process where blood clots maintain homoeostasis. “Platelets are cells found in the blood that are responsible for clotting,” explained Harlene. “For example, when you cut your finger platelets stick together to form clots – also known as aggregates – to stop the bleeding.”

The researchers hope that this knowledge can be applied to design new treatment strategies for mucormycosis. “Our findings highlight a direct interaction between platelets and Mucor spores, and we know that thrombocytopenia is common in mucormycosis patients. The concept of using anti-coagulants as part of the therapeutic strategy to aid mucormycosis treatment has yet to be explored but could prove promising,” said Harlene.

Next, Harlene hopes to identify which fungal components are involved in the process that triggers platelet aggregation. “Having characterised the platelet activation pathway in response to Mucor spores, we have been working on characterizing the Mucor cell wall to identify the fungal ligand(s) involved in this process,” she said.

Harlene Ghuman will present her research at the Microbiology Society’s Focused Meeting British Yeast Group 2021: The Future of Yeast Research. Her presentation, ‘The black fungus, Mucor, induces platelet aggregation through IgG receptor FcγRIIA and integrin αIIbβ3’ will take place at 10:25 on Wednesday 8 December 2021.