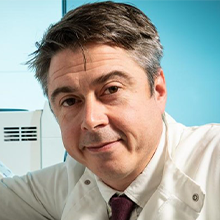 Sam Sheppard is Professor of Microbial Genomics and Evolution in the Department of Biology (University of Oxford), member of the Ineos Oxford Institute, and Fellow of St Anne’s College (Oxford). In this Q&A, we find out more about his research background, his thoughts on different aspects of publishing and the best thing about being a member of the Microbiology Society.

When did you first decide you wanted to do science?

I have a life-long interest in science of all kinds. As a child I was fascinated by the natural world and spent a lot of time identifying plants and animals, bird watching, fishing, etc. This logically led me to a biology degree and ultimately a career in science.

What is your biggest professional achievement?

I have been lucky enough to have had quite a fulfilling career so far. My work on bacterial speciation, genomic epidemiology and pathogen source tracking have been influential and I think I am best known for conducting the first formal bacterial genome-wide association study – published in 2013. I have also led some major initiatives, for example I was one of two PIs of MRC-CLIMB and helped to create one of the largest cloud computing infrastructures for microbial bioinformatics. However, as I have got older, my ideas about professional achievement have changed. In fact, I am now most proud of the contributions that I have made to the wider microbiology community and especially the people who have passed through my lab – many of whom are now independent scientists and lead groups around the world.

What would you be doing in your career if you weren't a scientist?

This is a difficult one. Probably a writer of some kind but I have no idea in which field.

Why are Society journals important?

Now, more than ever, I think it is important that researchers stay true to the principals of scholarship, rigour and open science. Profit seems to be an increasingly important motivation for some publishers. This raises concerns about how economic forces might influence the scientific literature over time. With all profits channelled back into supporting research communities, society journals remain an essential outlet for unbiased, learned contributions. 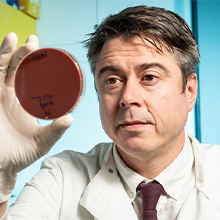 What does it mean to you to be the Editor-in-Chief of Microbial Genomics?

It means a great deal to me to be Editor in Chief of Microbial Genomics and help to protect and promote the kind of science journalism that I believe in. There are an increasing number of outlets for publishing science and over the years I have heard all kinds of arguments about replacing the journal-centric peer review process. Generally, I am in favour of some forms of science self-selection. For example, in some cases, a paper might be published online as a pre-print and be so well-received that it gathers it’s own momentum among the community. However, I am a strong believer that self-selection should not replace traditional editorial and peer review for one simple reason: popularity is not a measure of scientific integrity, rigour or scholarship. All of these fall under remit of good editorship.

What’s the best thing about being a member of the Microbiology Society?

First and foremost, the Microbiology Society is fun and a great network for making friends. Pondering this question in a little more depth, I would also say that having a professional network outside of one’s primary job can also protect individuals that might find themselves isolated at times for one reason or another. I strongly encourage early career scientists to join.

Why do you think authors should be publishing their articles Open Access, and getting involved with Publish and Read? Why is the Open Data policy important for Microbial Genomics and Open Science?

Thankfully, open access publishing is now mandatory for research funded by some major science funders (e.g. Wellcome) and this model is gradually gaining traction elsewhere. In my opinion, there is no place in science for barriers to accessing knowledge, such as cost. Such barriers can favour established privileged groups and stop others from climbing the ladder to become leaders in the field.

The Mgen open data policy is also aiming to ensure that data is made available to all, ensuring the reproducibility of science.

Commenting on open access manuscripts, data sharing, and open science more generally, I can summarize my point of view by paraphrasing Bill Shankly (former Liverpool and Scotland football manager): The science I believe in is everybody working for the same goal and everybody having a share in the rewards. That's how I see the society, that's how I see life.

Microbiology is at a turning point in its 120-year history. Widespread next-generation sequencing has revealed genetic complexity among bacteria that could hardly have been imagined by pioneers such as Pasteur, Escherich and Koch. This data cascade brings enormous potential to improve our understanding of individual bacterial cells and the genetic basis of phenotype variation. However, this revolution in data science cannot replace established microbiology practices, presenting the challenge of how to integrate these new techniques. I believe that next generation microbiology will combine traditional microbiology and functional genomic approaches with population-scale comparative genomic analyses, thereby combing the rigor and detail of laboratory-controlled science with observations in real-world natural populations. It’s an exciting time to be a microbiologist!

Tell us about global inclusivity and how important it is to raise awareness on parachute research as outlined in the Microbial Genomics Editorial.