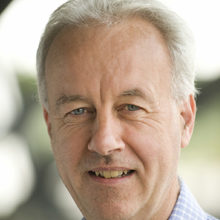 The Microbiology Society Prizes recognise excellence and are awarded to those making significant contributions in the field of microbiology, based on nominations received from our membership. They are awarded at our Annual Conference, where the winners also present their lectures. Ahead of the Marjory Stephenson Prize Lecture taking place tomorrow, Prerna Vohra from our membership interviewed Professor Gordon Dougan to find out more about his work and how it feels to win a Microbiology Society prize.

The Marjory Stephenson Prize is awarded to an individual who has made exceptional contributions to the discipline of microbiology. What does receiving this prestigious award mean to you?

This is a very special moment for me. I remember, as a second year PhD student, giving my first presentation quite nervously at a Microbiology Society meeting and the Society has really been embedded in my activities throughout my career. Now giving this Prize Lecture at the end of my career ties together nicely my time with the Society. This is a great opportunity and I would like to use it to acknowledge some of the people who have helped me get to where I am.

When did your interest in Microbiology begin?

It began when I was an undergraduate at Sussex studying biochemistry and genetics but it wasn’t cemented until I went to do a PhD with David Sherratt, who is now one of the most distinguished microbiologists in the country. We were very much at the very beginning of using bacterial plasmids for cloning and also the discovery of transposons and I suddenly became very interested in both the basic and applied sides of microbiology.

How did working in industry shape your research?

I was head-hunted by industry but I wasn’t sure about it at first. I was told by people that if I went into industry I’d disappear and never be seen again in academia but I actually learnt a lot. I learnt not to be fixated on the area you’re working on and to take a broader view on things, around vaccines in my example. I also got into policy and the development of medicines but I still kept a very sound academic base. I made a conscious decision not to get pigeon-holed or distracted by labels. When I walk into work in the morning, it doesn’t matter if I’m in an industrial or an academic lab, I’m still going to high quality and exciting science. That’s what I wanted to do and that’s what I wanted to be known for.

Did you envision genomics to revolutionize Microbiology the way it has?

I was hard-wired to be interested in genetics, initially microbial genetics, a mini form of genomics. When I first did my PhD, I was working on ColE1, a plasmid which was 4.2 kb long and that was a genome to me then. It was incredibly difficult to analyse, I never dreamed that even that would ever be sequenced, but we produced the first genetic map of that plasmid. As Fred Sanger’s technology became more well-known and as I developed my career, my interest in genomics was re-ignited and I felt confident that I could contribute to the field. We quickly got to bigger and bigger genomes and then to more and more genomes. Then, as new sequencing technology came in, it allowed us to go back to the applied and clinical side of microbiology and get closer to patients and almost transport the lab to the field. I’m still staggered by the pace of change in genomics and I am optimistic for the future. The opportunities are absolutely tremendous for people who can understand science in the laboratory but link that to the management of data. So, although times are pretty hard in some ways for young researchers, I think the young will inherit the Earth.

You have championed a number of highly successful individuals. Did you have mentors who looked out for you?

Yes, I did. My main mentor was Stanley Falkow, a famous American microbiologist. He was an absolutely incredible influence on my life. He was deeply interested in microbiology and had an encyclopedic knowledge of anything microbiological from growing unusual organisms to just connecting everything up. He also naturally embraced new technology and new ideas. I was mentored from one era into a new era by Stanley Falkow in many, many ways. There were other people as well who influenced me. David Sherratt definitely did. He showed me how to think about science. He worked on recombination and transposition models, which are intellectually very challenging, and I admired his ability to do that. There are several others who have helped me but they are the main two.

Have you ever stumbled upon anything by accident during your career?

Oh my god, I don’t know if I’ve made a big discovery by accident, but I have been able to recognise opportunities. For example, when I heard about next generation sequencing, my jaw hit the floor but within about 10 minutes I realised that this was going to revolutionize the way we did microbiology in the field. And because I had all these connections globally, I was able to take advantage of it immediately rather than working just locally. I was able to bring together people in the global health field. I have been able to do that 2-3 times in my career. Another example was when I heard about single nucleotide polymorphism discovery and the idea of using molecular signatures to track microbial populations. Again, within about 10 minutes, I realised that I could use this to transform the way I understood typhoid, which has been my big area of interest.

How important is networking to maintaining a successful career?

Networking is very important, particularly in the modern world. I always try to not to regard anybody as a competitor. I don’t like the word competition. I am ambitious and I probably am competitive but what I try to do is actually work with people and never regard somebody as somebody who I can’t talk to because they might take an idea. It’s important to maintain connections with people and keep everything positive and amicable, so that when you have an opportunity you can always go back to these individuals and work with them. Also, when I’ve trained people, when they leave my lab, I regard them as an opportunity for me because if they are successful in their career, then I can potentially go back to them and ask them for a few favours, in a positive way. It works both ways. I’ve learnt that the more successful people I have around me, the easier it is for me.

How, if ever, did you deal with failure?

I deal with failure on a daily basis. I always say to my students that we’re going to do an experiment and if it doesn’t work, it’s good. We must accept that it doesn’t work and never try to pre-predict what that experiment is going to tell us because it can be very disappointing. I learnt early on that what you need to do with students, particularly PhD students, is to try and give them something well-founded in the first part of their PhD, something which is likely to work, even if it isn’t the most exciting thing in the world, and try to de-risk things so they don’t feel the pressure of failure. But you always need to build success on your failures. That’s very important scientifically, and it’s a very good mindset, actually. It sort of de-pressurises the process. Failure is part of the process, so embrace it and hopefully, occasionally you get things right and you go in the right direction and build on that.

What advice would you give to early career researchers today?

I think the first thing is to be confident in yourself – don’t get put off by the process before you start. The other thing is don’t label yourself – you can move in lots of different directions and sometimes you need to go round about to get to where you want to go. So, set yourself a goal and work towards it. Sometimes in life you’re forced to go in a particular direction but I’ve been amazed at people who’ve come from a technical side and been able to build a career in academia and vice versa. It’s quite surprising how people can really re-invent themselves in a positive way.

This lecture takes place tomorrow at the Microbiology Society Annual Conference at 09:00 in the Main Auditorium.

Inspired by our outstanding Prize winners? Nominations for 2020 Prize Lectures and the 2021 Prize Medal are now open. Visit microbiologysociety.org/prizelectures for more information.