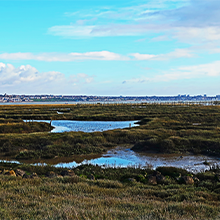 Acetaldehyde plays a key role in atmospheric chemistry by altering the atmosphere’s oxidative status or “self-cleaning capacity”. Acetaldehyde flux from aquatic environments to the atmosphere is thought to be under significant microbial control, yet the identity and diversity of microbial acetaldehyde degraders, and the mechanisms of degradation are, to a certain extent, unknown. “Acetaldehyde… is everywhere and in almost everything” said Dr Phillip Pichon, post-doctoral researcher and senior research assistant at the University of Essex, UK.

During his PhD research, Dr Pichon studied bacterial communities of the Colne Estuary and two local rivers in Essex, and isolated acetaldehyde-degrading bacterial strains. He used a combination of next generation sequencing techniques and quantitative polymerase chain reaction (qPCR) to identify members of the Pseudomonas and Arcobacter as key acetaldehyde degraders. Fourteen previously identified bacteria, belonging to five different phyla were also shown to degrade acetaldehyde, suggesting that the microbial acetaldehyde sink is highly diverse.

Bacteria can utilise acetaldehyde for energy production when it is abundantly available, by dissimilating acetaldehyde to carbon dioxide (CO2) via the oxidative decarboxylation steps of the tricarboxylic acid (TCA) cycle.

However, when acetaldehyde is limited and conditions are unfavourable, they reduce energy production and conserve acetaldehyde-derived carbon for their growth, potentially as a protective mechanism. “It’s like a carbon vault” explains Dr Pichon. Using genomics and proteomics, Dr Pichon was able to identify the previously unknown acetaldehyde degradation pathway used by Rhodococcus strain A14 that regulates energy production and the assimilation of acetaldehyde-derived carbon into biomass.

Understanding the pathways of microbial acetaldehyde degradation is important, as acetaldehyde-degrading microorganisms are present in freshwater, estuarine, and marine environments, and may significantly influence acetaldehyde flux to the atmosphere.

“Acetaldehyde is also found in a lot of things consumed daily, such as coffee, fruits, vegetables, and alcohol." said Dr Pichon. “Acetaldehyde itself is a toxic compound and is a primary contributor to us developing a hangover, due to its effect on dopaminergic neurons in the brain. So it’s really quite impressive that bacteria can use such a toxic and highly volatile compound as an energy source so readily.”

Dr Pichon will be presenting his findings at the Microbiology Society’s Focussed Meeting ‘Microbial Cycling of Volatile Organic Compounds: Biogeochemistry to Biotechnology’. His talk, titled ‘Microbial degradation of acetaldehyde in freshwater, estuarine and marine environments’ will be taking place at 12:30 BST on 25 May 2022.