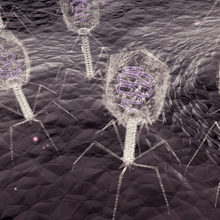 The Microbiology Society is excited to announce the launch of a new collection on bacteriophages in Microbial Genomics.

Bacteriophages were discovered 100 years ago and have since been a key tool used in biological research. Initially used as model organisms for work in genetics and molecular biology, bacteriophages are now known to be one of the major drivers of bacterial evolution and diversification. With the introduction of sequencing technologies, phage genomics and metagenomics highlighted their tremendous diversity and roles in controlling ecological systems within a range of environments. Due to their specificity, phage genomes are now also being manipulated as therapeutics, potentially providing an alternative to conventional antibiotics. Giant phages have also been discovered and may represent a novel genus of living organism.

Guest-edited by Microbial Genomics Editor Professor Testuya Hayashi (Kyushu University, Japan) this collection welcomes genomics-based research articles, Methods, and Reviews relating to the diversity of bacteriophages, with a focus on their roles in the evolution of bacteria and ecosystems, and also welcomes submissions of large-scale genomic analyses which provide the basis for developing novel phage therapies.

The deadline for the submissions is 30 November 2019 and authors wishing to be considered for collection should submit their manuscript to the online submission system, indicating in their cover letter that the manuscript it is intended for the Bacteriophages collection.