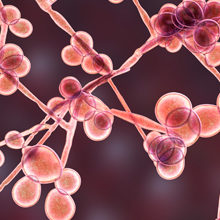 Researchers from the University of Toronto have been investigating whether chemical collections could be a source of new antifungal drugs. The group screened two compound libraries to identify chemicals with activity against four major disease-causing fungi.

Fungal diseases are responsible for an estimated 1.5 million deaths annually. Candida albicans, Candida glabrata, Candida auris and Cryptococcus neoformans are important fungi that cause disease in humans. “These deadly infections generally target the most vulnerable of people, those who are immunocompromised. These include patient populations on chemotherapy, transplant recipients, or those already infected with HIV or suffering from pulmonary diseases,” said Kali Iyer, PhD candidate at the Cowen Lab.

The group screened two collections: the RIKEN Natural Product Depository and a diverse synthesised chemical collection from Boston University’s Center for Molecular Discovery. They were looking for chemicals with antifungal activity, or chemicals which might improve the activity of an existing antifungal called fluconazole. Fluconazole is the most commonly prescribed antifungal, but resistance to this drug is increasing, particularly in C. auris.

Screening chemical collections is an effective way to identify chemicals with a certain activity, and chemical collections have also been a source of new compounds with antibacterial, antiviral, and anticancer activity. “Screening large collections of chemicals is an excellent way to discover new ways to tackle any disease as any hits from a screen already have the ultimate effect you are looking for - killing the disease-causing agent,” said Ms Iyer.

So far, the group have been successful in identifying chemicals which have activity against disease-causing fungi. “The chemical libraries we have screened to date have identified several new compounds that target vulnerabilities in fungal pathogens,” said Ms Iyer. “There are two key next steps; to better understand the clinical practicality of these antifungal strategies. Is the new compound's mechanism of action effective at killing and eliminating the fungus during an infection?

The second is a more chemical perspective. Can we alter the chemical structure so that it binds to its fungal target more effectively and more specifically?” she continued.

There are a limited number of drugs available to treat fungal diseases, and due to fungi evolving resistance, these lifesaving medicines are becoming less effective. “There are only three major classes of drugs available to treat these deadly diseases, all of which are associated with their own shortcomings, such as human toxicity and global availability. These drugs are further undermined by the rise in drug-resistant infections, which make our limited treatment options extremely precious,” said Ms Iyer.

“Successful antifungal discovery is hindered by the high similarity between fungal cells and human cells, when compared to other organisms such as bacteria that cause disease. This means that finding compounds that kill fungal cells but do not harm the patient themselves is challenging,” she continued.

Kali Iyer will present her research at the  digital event Candida and Candidiasis 2021. Her talk, titled ‘Identifying and Characterizing Novel Antifungals’ will take place at 15:30 GMT on Friday 26 March during the Drug Discovery and Resistance session. Find out more about her research in this blog.

Hosted by the Microbiology Society, Candida and Candidiasis 2021 will take place between 21–27 March. This will take place as a digital event, following the cancellation of the in-person meeting that was scheduled to take place in Montreal, Canada in April 2020. The event will provide a vital online forum for the Candida research community to share the latest advances and ideas in the field.