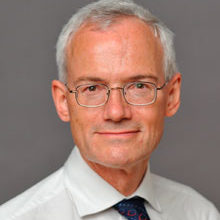 Our Prizes recognise excellence and are awarded to those making significant contributions in the field of microbiology, based on nominations received from the membership. They are awarded at our Annual Conference, where the winners also present their lectures. Ahead of the Marjory Stephenson Prize Lecture, Connor Bamford, from our membership, interviewed Professor Geoffrey L. Smith to find out what inspires him, more about his work and how it feels to win a Microbiology Society prize.

The 2018 Marjory Stephenson Prize will be awarded to Professor Geoffrey L. Smith FRS from the University of Cambridge. Geoffrey studies poxviruses, including the vaccinia virus. His recent research has focused on the way that the vaccinia virus interacts with human cells and modulates the immune system. These findings have been important to his work on improving the vaccinia virus as a vaccine vector. In 2003, Geoffrey was made a Fellow of the Royal Society, and he is Chair of the WHO Advisory Committee for Variola Virus and a Wellcome Trust Principal Research Fellow. From 2003–2007 he was Editor-in-Chief of the Society’s Journal of General Virology.

What first sparked your interest in science?

As a child I remember my mother reading Rudyard Kipling to me and rather like the Elephant’s Child on the banks of the great grey-green greasy Limpopo River all set about with fever-trees, I was filled with satiable ‘curtiosity’ and wanted to understand why things are so. At school, science seemed one route that might provide answers. At school, I was allowed to investigate, question and experiment. And at school, I was inspired by my science teachers.

What factors influenced your decision to pursue a career in research?

Both my parents were medical doctors and were pleased when I decided to apply to read medicine, but perhaps less pleased when I did not get into medical school. So I went to university to read biochemistry and microbiology and loved it.

You are currently Professor of Pathology at the University of Cambridge. Can you tell us other insightful details about how your career has taken you to your current position?

After a BSc in Microbiology and Biochemistry in Leeds, and a PhD at the National Institute for Medical Research in London, working with influenza virus with Alan Hay, I became a postdoc at the National Institutes of Health, USA. I was lucky to join Bernard Moss’s laboratory at a wonderful time and had 39 terrific months developing vaccinia virus as an expression vector and demonstrating the potential of live recombinant viruses as live vaccines. After this postdoctoral stint, I was appointed to a lectureship in virology within the department of pathology at the University of Cambridge back in the UK. Here I developed my own group working with poxviruses and was fortunate to win a Fellowship from the Lister Institute of Preventive Medicine and thereby be able to concentrate on my research. A couple of years later, I moved with promotion, to the Sir William Dunn School of Pathology in Oxford, where I continued to study how vaccinia virus interacts with the host cell and immune system. In 2000, I left Oxford for Imperial College London and was fortunate to win a Principal Research Fellowship from the Wellcome Trust to accompany this move. After 11 years at Imperial College I returned to Cambridge to the same department I left 22 years earlier, now as head of department. Moving institution every 10 years or so has been both an enriching experience and stimulating.

You have dedicated your research to studying a group of viruses known as poxviruses, which includes the well-known agent that caused smallpox, the variola virus. What makes this one group of viruses so fascinating to you?

Poxviruses have played important roles in human history and in medicine. Variola virus was the cause of smallpox, a devastating human disease that killed an estimated 400 million people in the 20th century alone, and more than a 100 years after an effective vaccine was available. Cowpox virus and then vaccinia virus represent the first human vaccine and the first to be used to achieve the global eradication of a disease: smallpox.

Poxviruses, like vaccinia virus, have many interesting properties: despite being DNA viruses, they have evolved to replicate in the cytoplasm and encode their own transcriptional enzymes to enable this; they have large and complex virus particles with large genomes (by most virus standards) that encode about 200 genes; many of these genes (estimated between on third and one half) are not essential for virus replication but encode proteins that function to supress the host response to infection. Studying how these proteins function is teaching us about how the immune system works, and manipulating these genes within the virus is enabling the creation of more immunogenic and safer vaccines.

You are perhaps most well-known for your work on using poxviruses as vectors to deliver genes to cells. Why is this important?

The development of vaccinia virus as an expression vector has had many applications: it established the principal that live recombinant viruses can be used as live vaccines against other pathogens, a principal applied thereafter to many other viruses and micro-organisms. The vector system itself has been used widely: in biotechnology to produce protein within eukaryotic cells; in cell biology to study the function of proteins; and in immunology to study how the immune system works and how it recognises virus-infected cells and how viruses can escape this.

What have been your personal research highlights?

I have selected highlights from my time while a postdoc in USA, Cambridge (twice), Oxford and Imperial College London.

From USA, the highlight was developing vaccinia virus as an expression vector together with Mike Mackett in Bernard Moss’ laboratory. This was a wonderful experience and I will always be grateful to Bernie for the opportunity to work in his lab and to team up with Mike.

In Cambridge (first term), for sequencing part of vaccinia virus genome and coming into the lab after the overnight computational comparisons of the predicted vaccinia proteins with protein databases to find an astonishing array of similarities with cellular proteins. This spawned many new projects including our ongoing interest in immune evasion by vaccinia virus.

At Imperial College London, for discovering how vaccinia virus spreads from cell to cell faster than predicted from its replication kinetics, and, after the paper was published, being asked by Warner Brothers if they could use the movies from our paper in their movie “Contagion”.

And in Cambridge (second term) for uncovering the surprisingly large number of vaccinia virus proteins that shut down innate immune signalling pathways within infected cells, the mechanisms by which they do this, and how viruses lacking such genes make more potent vaccines.

What scientific questions keep you awake at night?

It is a great honour to receive this prize on behalf of all those who have worked in my lab. Marjory Stephenson was an inspiration: she made huge discoveries about microbial biochemistry, was one of the first two females to be elected fellows of the Royal Society, was a very rare female scientist at the University of Cambridge by the middle of the 20th century, and had a glittering scientific career in a male dominated world. She remains an inspiration to all, and especially women, to have a career in science and retain the satiable ‘curtiosity’ of Rudyard Kipling’s Elephant’s Child.

If you had one piece of advice for someone early in their career, what would it be?

Believe in yourself and follow your instinct, never look back, only look forward, do not dwell on disappointment, nor too long savour success, but rather resolve to redouble your efforts to re-devote and re-dedicate yourself to the great task before you.

If you couldn’t be a scientist, what would you be and why?

Perhaps I would be doing something outside: maybe farming, or being involved in the coaching or administration of sport, or something manual, building things, enjoying my interests in carpentry or dry stone walling.

This lecture takes place today at the Microbiology Society Annual Conference at 09:00 in Hall 1.

Inspired by our outstanding Prize winners? Nominations for 2019 Prize Lectures and the 2020 Prize Medal are now open.