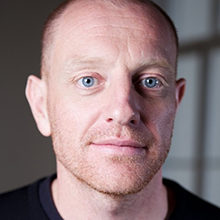 Today at the Microbiology Society’s Annual Conference 2017, Professor Stephen Baker from the Oxford University Clinical Research Unit (OUCRU) in Ho Chi Minh City, Vietnam, will be awarded the Fleming Prize, in recognition for his work on enteric diseases in low- and middle-income countries.

I was always into dirty stuff – fiddling around in the garden, getting muddy, that sort of thing – and of course I had a common schoolboy fascination with toilets and poo. Even as a 40-year-old this fascination still hasn’t left me – in fact this slightly grim interest in an amazing substance probably led me directly to work with it!

Another reason is that I had some very good biology teachers at school. Mr Wright was excellent, he looked like John Cleese, and he taught me as both a GCSE and an A-Level student. I remember studying transcription and translation and thinking that this was pretty cool and, how do we know how this works?

So you realised early on that biology was something you wanted to pursue?

I knew I wanted to do something scientific, but I didn’t know what career I wanted follow. I was more interested at the time in getting a job that was going to give me a stable salary. Pharmacy was what I thought I really wanted to do at university, but I ended up studying Biomedical Sciences, almost by mistake. That turned out to be one of the best things that ever happened to me.

How did that come about?

I wasn’t exactly an A* student at school, so I went through clearing to find a university place and spoke to a very nice chap called Dr Ash at the University of Bradford, who persuaded me to come and see him. He talked me into doing Biomedical Sciences, and I was there for four years. I found something I was interested in and wanted to work at.

Bradford has an important place in the history of microbiology – thinking about “Woolsorter’s Disease” and the discovery of anthrax, for example.

Well it’s important to note that I don’t actually have any formal training in microbiology! I probably sat in a handful of microbiology lectures, but what swung me towards bacteriology was getting a job in the Sanger Centre (now the Wellcome Trust Sanger Institute), which was just getting into bacterial genome sequencing. I was pretty sure at university that I was going to get into cell biology and I was particularly interested in apoptosis and cancer therapy. I got a job working on bacterial sequencing because, well, it was a job and even then the Sanger was well regarded. Actually, I was fairly lucky to get the job, and this turned out to be fortuitous as it triggered my interest in the microbial genomics and I went on to do a PhD in bacteriology.

In terms of mind-set, you moved from an interest in cell biology, to working on early bioinformatics, then to bacteriology. How did you cope with the changes in discipline?

I like to do lots of different things. Rather than developing something and working on it in intense detail, I like to work incredibly broadly. This probably goes back to my schooldays and me having a very short attention span! But I don’t like being pigeonholed into a particular area. For example, my group here in Vietnam has done a randomised control trial on probiotics; we have a major cohort study going on; we’re doing some basic vaccine development work; we do some immunology; genomics studies; and even some public health work. We have a huge array of things going on in different disciplines, and I really like that. Everyday is different.

Do you worry that with such research breadth you run the risk of lacking depth?

The conventional view is that you’d want to work on a particular microbe, protein, or gene and spend 20 years characterising everything associated with it. Here in Vietnam I generally work on diarrhoeal diseases and typhoid fever. The work on typhoid includes many of the things I’ve just mentioned. While there is a breadth of things going on, concentrating on one disease area (i.e. enteric infections) provides the depth.

How did the opportunity to move to Vietnam arise?

While working at Sanger I found the epidemiological aspects associated with genomics more interesting than other areas, and I wanted to understand human infection in the locations they arose. I’d done some research in Vietnam during my PhD in 2004 and met Jeremy Farrar, who was Director of the Oxford University Clinical Research Unit out there. He came to the Sanger Institute for meetings on a few occasions; we had a chat during one of them and he asked me to apply for a job in Vietnam. I moved there in 2007.

Leaving everything I knew behind was terrifying. I actually sat on my own in an office for the first few months wondering what I was going to do. Then I found some projects I could get involved in and got moving. I published some low impact senior author papers, then got my first grant and things started to move a bit more quickly.

At the start I wasn’t sure what was going to happen because it was a whole different outlook on science in a country with different cultural interactions where you don’t speak the language and don’t really understand how things work. I guess it sounds quite daunting – and I’ve had my ups and downs – but I’ve just gotten on with it and I have learnt move than I could imagine.

What are the benefits of moving abroad to do science? Should early career researchers consider it?

It’s been great for me, but it’s not been easy. While there are challenges moving anywhere, I think the benefits hugely outweigh the costs. Coming here and working with clinicians, patients and the microbiologists who are actually isolating specific pathogens puts things a bit more into context and changes your approach to science. In my opinion, it lets you think about things in an applied way, rather than in a purely academic one.

If you could give your younger self one piece of advice, what would it be?

Get on with it. It’s really easy to spend time mentally working your way through something, only to end up talking yourself out of doing it in the first place. You can get advice on a problem from as many people as you want, but you’ve got to have the courage of your own convictions and get on with solving it.

I didn’t know I’d been nominated, so first of all I thought it was a mistake! When I realised it wasn’t, I was obviously delighted. Winning anything is nice, but just being associated with the previous winners is important as it shows that somebody out there thinks that you’re doing the right thing from time to time.