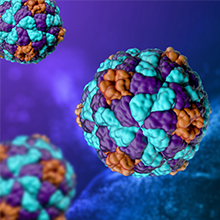 Hepatitis A virus (HAV) is a unique, liver-tropic picornavirus that has not been as widely studied as many other picornaviruses, despite having a significant impact on global health. Highly effective and safe vaccines are available, yet their use is not universal and since 2016 the US alone has seen over 24,000 hospitalisations and 400 deaths due to Hepatitis A. Currently there’s no treatment available for severe cases other than liver transplantation, but research at the University of North Carolina at Chapel Hill supervised by Prof. Stanley M. Lemon has identified an essential step in HAV infection, a finding which offers hope for the development of future therapeutics.

Prof. Lemon explained the difficulties of developing therapeutics for the disease: ‘Hepatitis A virus is a picornavirus, but in the past ten years we’ve come to realise that it’s very different from other better-studied picornaviruses, such as poliovirus or foot-and-mouth virus. From a structural perspective, HAV is as related to some insect viruses as it is to polio virus. And its mechanisms for entering cells to establish infection, and for its release from infected cells, have proven to be very different from these other picornaviruses. For me, it’s like an onion, every time we peel off a layer there’s something else underneath which is unique and different’. One aspect of HAV which is unusual is that it is only released from infected cells via small vesicles, with the viral capsid wrapped in host cell membranes that protect it from neutralizing antibodies.

In a paper published in 2020, Prof Lemon’s team identified multiple host cell genes which were required for HAV replication. Many of these genes were found to be involved in lipid synthesis. Several encode enzymes needed for synthesis of gangliosides, which his team demonstrated are needed by the virus to enter cells and initiate replication.  Two other host factor genes were found to be involved in fatty acid synthesis, including one which encodes an enzyme which is required for the elongation of fatty acid chains. Recent research led by a member of the research team, Dr. Tomoyuki Shiota found that targeted knock-out of these genes ablated replication, showing they are essential for Hep A infection.

‘Fatty acid chains are the building blocks for membranes,’ explains Prof. Lemon. ‘This  enzyme, 17-beta hydroxysteroid dehydrogenase 12 (17b-HSD12) catalyzes an essential step in a cycle which adds two carbon fragments to fatty acids. There’s no other enzyme which can do it. That’s interesting as it indicates that Hep A needs very long chain fatty acids, something that poliovirus appears to be able to do without.’

This interpretation of the results was supported by work from another researcher in the team, Dr. Qibin Zhang, Professor and Co-Director of the Center for Translational Biomedical Research, at the University of North Carolina at Greensboro, found that HAV induces substantial increases in very long-chain fatty acids in infected cells. ‘That’s really quite unique’ explains Prof. Lemon. Very long chain fatty acids are able to span across the two leaflets in a membrane, which can provide stability to a membrane at points of curvature. Next-generation sequencing of RNA transcripts in Hep A infected cells by the researchers revealed an increased presence of mRNAs encoding additional lipid-related enzymes in the fatty acid elongation cycle. ‘Our interest now is knowing how the virus induces these transcriptional changes’.

‘Our work represents a further characterization of a really unique picornavirus… All of these viruses seem to re-jig lipid synthesis to aid their replication, but Hep A always does things differently… The more we understand the molecular biology of the virus the better equipped we will be to intervene in infection and perhaps favourably impact disease in someone who’s infected…. This is not a trivial virus… Most people will get over it in a few weeks, but it can cause really serious liver injury, particularly in older people, and the more we understand it the better equipped we will be to deal with it.’

This research will be presented by Dr. Shiota at the Europic Conference on the 6 June at 15:15 BST.