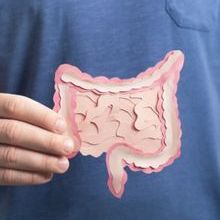 There are estimated to be between 300–500 different populations of bacteria found in the stable gut microbiota. All are essential for the maintenance of a healthy digestive system which in turn impacts many aspects of host health. The exact populations and their behaviour depend in part on the diet of the host, although some bacteria can use sugars found in the mucus layer for their energy source, and can therefore be more stable as these are not subjected to dietary variations. The use of antibiotics can significantly perturb the population of bacteria found in the gut which can have detrimental health effects on the host.

A research group at the Instituto Gulbenkian de Ciência in Portugal has been working to investigate potential therapeutic approaches to counteract gut microbiota imbalances after antibiotic use. This includes manipulation of the communication systems used by bacteria to promote bacterial growth using the bacteria’s own quorum sensing molecules. Ana Matias, a master’s student within the team, explained: ”In my lab we specifically like to focus on quorum sensing which is the method bacteria have to communicate with each other. Bacteria use molecules to communicate in a synchronised manner and we’re especially interested in inter-species communication, so how species can communicate with other species, not just within themselves”.

A paper published by the group in 2015 showed that there was a correlation between the increase in a quorum sensing molecule, AI-2, and the antibiotic effect on the mice gut microbiota. Follow up work then found that there were two types of bacteria found in the gut whose populations were being significantly impacted by the presence of high levels of AI-2, Barnesiella and Muribaculum. Ana’s research took this work forward. “My job was to figure out how the interspecies quorum sensing molecule, AI-2, was interacting with these bacteria.”

The group had previously found that in some species of bacteria the presence of AI-2 down-regulated a gene encoding an enzyme, known as fucosidase, that is able to break down the sugars in the mucus layers. Given the previous research, Ana was interested in how the presence of AI-2 could affect Barnesiella and Muribaculum, specifically their fucosidases. She began by establishing if Barnesiella and Muribaculum could grow in fucolsylated sugars found in the mucous layer before introducing AI-2 and monitoring the growth rate and yield of each species. “What I saw for both species was an improvement in the growth rate or the growth yield, and sometimes both, which means that overall they were growing better [in those sugars] if AI-2 was present.” This gave Ana the hint that the fucosidases might be upregulated in these species in the presence of AI-2. Now Ana will pursue this hypothesis using genetic approaches and phenotypical assays.

Barnesiella and Muribaculum species are present in most stable microbiota communities, which makes them promising targets to promote recovery after a disturbance: “If we understand the mechanisms used by these bacteria for gut colonisation we can hopefully explore these mechanisms to go back to the [microbiota] original state after a disturbance, like antibiotic treatments,” Ana explained. “Bacteria are usually dependent on what the host eats, so if you eat only McDonalds or eat lots of fibre the bacteria will be very different. But the mucus layer is always there, it’s not going to vary from meal to meal, so it’s a reliable energy source for bacteria. So being able to use that as an energy source is a huge advantage and if quorum sensing molecules can help them use that [to recover in number] that’s even better."

Ana will present a poster with her findings at the Cell–Cell Communication in Bacteria: Fundamental And Applied Aspects Focused Meeting.