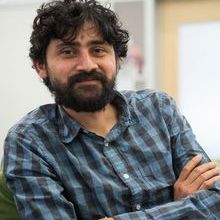 The Microbiology Society Prizes recognise excellence and are awarded to those making significant contributions in the field of microbiology, based on nominations received from our membership. They are awarded at our Annual Conference, where the winners also present their lectures. Ahead of the Unilever Colworth Lecture 2020: Frugal science: a practical guide to making science accessible to all, taking place today, Robert Will, Communications Representative of the Society’s Early Career Microbiologists’ Forum Executive Committee, has written a biography of Manu Prakash’s career to date.

Manu Prakash is an Associate Professor in Bioengineering at Stanford University, USA, and describes himself as a physical biologist and inventor. Born in Meerut, India, he graduated from the Indian Institute of Technology Kanpur with a Bachelor of Technology in Computer Science and Engineering in 2002. He then moved to the USA to start a PhD in Media Arts and Sciences at the Massachusetts Institute of Technology (MIT), completing it in 2008. The degree, described on the MIT website, “focuses on the invention, study, and creative use of new technologies that change how we express ourselves, how we communicate with each other, how we learn, and how we perceive and interact with the world”, and this is something Prakash exemplified throughout his career.

The Prakash group’s research spans multiple disciplines, encompassing the physics and chemistry within biological systems, as well as engineering new tools based on their discoveries. Their work constructs in vitro ‘toy’ systems to investigate how shape and form is computed in biological substrates, studies ‘living fossil’ organisms to tackle the origins of multi-cellularity and regeneration, while explaining complete behaviour and elucidating the structure and function of biological systems at molecular and cellular scales. A very busy trio of topics already, but what Dr Prakash is most known for is the creation of tools to ‘democratise access to science’ – an endeavour he has described as ‘frugal science’.

Putting this guiding phrase to the world of global health, Dr Prakash invented the Foldscope. A microscope made out of folded paper, it can perform on par with conventional tools, achieving 140X magnification and 2 micron resolution, all while costing less than a US dollar to produce. Funding to support the development of Foldscopes came from several major organisations, including the Bill and Melinda Gates Foundation. Prakash has said that the inspiration for the device came from being in a field station in Thailand, which was equipped with a microscope that everyone was too afraid to touch due to it being worth more than their salaries. The first Foldscope prototype was produced in 2014 and by 2019, more than a million had been shipped worldwide. Future research aims to develop a medical foldscope, costing US$10, to expand its functionality even further.

Next up for Prakash was tackling the expense and size of centrifuges, crucial to so many parts of biomedical science. Inspired by the whirligig toy (one of the oldest toys in mankind’s history), the team deciphered the physics involved in making a whirligig spin and adapted it to centrifuging. The result was the Paperfuge, a sample-holding disk, able to be spun by hand, at up to 120,000 rpm (30,000 g). By adapting the spinning disk at the centre, the Paperfuge can separate blood and plasma to diagnose anaemia, identify malaria parasites, or separate nucleic acids and bulk samples, all while costing less than 20 US cents to make. Able to be used anywhere and by anyone, the power of democratising access to science is plain to see.

Prakash has been widely recognised for his achievements. Prior to his appointment as an Associate Professor in Bioengineering at Stanford, he was a junior fellow of the Harvard Society of Fellows (2008–2011), and a Frederick E. Terman Fellow at Stanford 2011–2013. He has won many awards for his work, including the MIT Ideas Sustainability Prize in 2003, while he was still undertaking his PhD. Prakash was a TED Senior Fellow in Technology, Entertainment and Design 2011–2013, and won the 2020 Humanitarian Award for Contributions in Science, Technology and Robotics awarded by Rotary International. In 2016 he became a MacArthur Fellow, colloquially known as the ‘Genius Grant’.

Prakash’s Unilever Colworth Prize Lecture: Frugal science: a practical guide to making science accessible to all will be taking place at 09:00–09:50, today at Annual Conference Online 2021. He will be discussing his ‘frugal science’ approach, as well as using examples of his work, including Foldscope and Paperfuge. He will show that by utilising these tools, the connecting between science education, global health and environmental monitoring, a healthier humanity and a healthier planet can be achieved.

Inspired by our outstanding prize winners? Nominations for 2022 Prize Lectures and the 2023 Prize Medal are now open. Visit the Prize Lecture pages for more information.