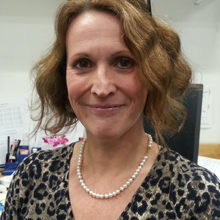 Today at the Annual Conference, Professor Wendy Barclay from Imperial College London will be awarded the 2016 Peter Wildy Prize, in recognition of her work to inform the public about the real and perceived risks of pandemic flu and ensuring an open debate for gain of function virology studies.

When did you know you first wanted to be a scientist?

The first time I began to love it was when I began my undergraduate project and started doing my own research. I probably came quite late to the passion for the subject; it was my undergraduate supervisor and the people in the laboratory who showed me what fun it was and how a ‘scientific life’ was one I probably wanted to lead.

I had originally wanted to study Chemistry at university, but I got wooed away by Biology. I wanted to do science where you could break everything down into its minimal components – a bit like chemistry, I suppose – and with virology that’s what you can do. The genome is everything; during my PhD and first postdoc you could make a virus from a piece of synthetic nucleic acid, put it into a cell and you could make more virus – everything required could be found in the genetic sequence.

How has the field of virology changed since then?

Of course the field has changed massively, but the approaches really haven’t. We still pick apart the mutations in genomes that make viruses what they are – why one does one thing, but another does something very different. While we’re doing this in a similar manner the molecular biology has moved on immensely, and the capacity to deep sequence and look for global cellular responses, or things being switched on or off – those things have changed dramatically.

So having a good question to answer at the start is still the most important thing?

Absolutely and I think that’s imperative to say, because it’s easy to get carried away with the technology and forget that the most important thing is the question.

Does all the new technology mean that virology is having a renaissance of sorts?

Maybe I’m blinkered, but I think that virology has been bubbling along very successfully, meeting lots of challenges for all the decades I’ve been involved with it. Recently I was lucky enough to be invited onto the BBC Radio 4 programme Science in Action, where I was on a panel looking back at 50 years of science. I was asked what I thought the biggest achievement in my area was. I’ve lived through the era where HIV was discovered to be the causative agent of AIDS, after which researchers studied that virus so intensely that they could develop antiviral drugs, transforming a disease that was a death sentence into something a person can have and still live a healthy life.

In your outreach work, what are some of the common misconceptions that you find about virology?

I do lots of public events, and invariably at the end of a lunchtime talk on influenza I’ll get people who’ve given up their time to attend tell me about the folk remedies they use to prevent themselves getting flu – onions, bananas, hot toddies… That’s disappointing because these days science has so much more to offer. I want to get out and tell people about how exciting modern science is, and how it will transform our lives if we let it in. I think this disparity between what scientists know about viral diseases like flu and what the rather low level of public knowledge is, is quite alarming. Also, their general lack of trust in cutting edge science is a wake-up call for scientists when you get involved with science communication.

What do you think could be done to change this?

I think we should be urging to have more microbiology in the education curriculum, so people are comfortable with the subject and with the molecular biology tools we use. Then these become the norm, rather than folk remedies. School students are grossly underestimated and in my opinion they can grasp complex concepts incredibly quickly, so we should challenge them in their science lessons to keep them engaged.

Also, as a researcher, if a tabloid journalist calls up, we should make sure to give them the time of day and answer all their questions, but try our very best to slip in some state-of-the-art science in an accessible way that gets them excited.

What are your favourite aspects of outreach?

There’s a massive buzz when you’re able to go to a recording studio and be interviewed on air about an influenza outbreak or pandemic. Unlike colleagues working away in government institutes, often academics have the luxury to be able to field the questions that the media want addressed – it’s been very exciting to go on and answer the questions live.

That said, media work doesn’t give you the feedback that you get doing a public lecture or a school visit, as quite often there’ll be people who want to stay behind and chat and are full of questions – this is fantastically rewarding.

Why should researchers do outreach?

The first thing to say is that it’s really good for us. Going out and talking to the public and having them ask questions about your subject can give you really good ideas, or make you ask yourself ,“Are the things I’m doing really addressing the fundamental questions that people need answering?”

The other reason is that we can’t ask the public to take our advice on things like the gain of function debate unless they have some level of knowledge. With adults you can try and slip in some basic stuff, but with children we need to do better than we already do, getting fundamentals in there from the very start of their schooling.

Do you think outreach work is improving?

Yes I do. There are some fantastic young people starting out who see it as part of their job to do both research and outreach, and they do it really well. There are more and more of them coming through and that’s the way it should be.

I’m completely flattered; there are lots of people who do wonderful science communication. I’m lucky enough to have been picked, but there are so many others so I’m delighted.