What can ‘fatbergs’ tell us about people’s health? 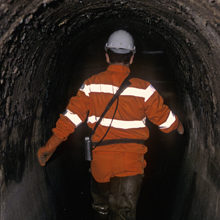 A fatberg is a large clump of oil, human sewage and waste found in sewage systems. In 2017, a 130-tonne fatberg dubbed ‘The Beast’ was found blocking Whitechapel sewer and took nine weeks to clear.

“We found Campylobacter, Escherichia coli and Listeria - species which are a common cause of food poisoning in humans - and some antibiotic resistant strains of bacteria,” said Pachebat.

In addition to a wide range of bacteria, parasite eggs were also found in fatberg samples. The eggs were from either Alaria alata or Fasciola hepatica, both of which are zoonotic, but researchers said it is unlikely the eggs came from humans.

Tonight, Professor Jo Hamilton and Dr Pachebat will discuss their findings in ‘Fatberg Autopsy: Secrets of the Sewers’ on Channel 4 at 21:00 GMT.