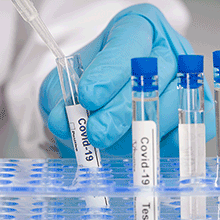 Like most of the UK microbiology community, I watched in horror as the nation stumbled its way towards an uncontrollable rise in COVID-19 cases in January and February of 2020. The failure to monitor borders led to multiple introductions of the virus into the UK, seeding numerous transmission chains. As cases increased, the government made the decision to test only those who attended hospital with respiratory infection symptoms for the virus, effectively destroying any ability to truly determine the scale of the epidemic in the UK. Along with many of my colleagues, I was very vocal in the press and media as to why this was a terrible idea, and that testing capacity in the UK had to be dramatically increased in a very short space of time. I was amongst those advocating the deployment of university labs with the capability to do so to switch over to performing community SARS-CoV-2 testing to determine the scale of the epidemic.

In early March, I was invited to a teleconference organised by the Office for Science, to discuss how the UK may ramp up its testing capacity. The upshot of that meeting was that rather than a flotilla of small regional university labs being established, a small number of ‘mega-labs’ would be created across the UK to allow the creation of large-scale symptomatic community testing. On 16 March 2020, I received an email asking if I would be able to take a secondment to help establish the first of those testing labs at the UK Biosample Centre in Milton Keynes, and if I could help in recruiting volunteers to work in the facility. A quick email to the Microbiology Society’s Chief Executive, Peter Cotgreave, saw the Society swing into action, coordinating messaging to relevant university schools and departments and willing volunteers. A call to arms on Twitter also led to a number of volunteers being recruited, including a number of PhD students and postdocs from Birmingham.

I arrived at Milton Keynes for the first time on Thursday 26 March 2020, along with 12 other scientists, including Dr Maddy Seale from Oxford and Dr Joana Viana from Birmingham. We were met by Dr Mike Hill, Dr Stewart Moffat and their team from Oxford who had been in situ for 10 days setting up the lab, its equipment and reagents. On that first day, we tested 500 samples manually and worked a 14-hour shift, troubleshooting and identifying protocols to allow us to reach the capacity being requested by the government of some 50,000 tests per day. Within three weeks, we had 240 people split into four teams, operating 12-hour shift patterns, with the lab functioning 24/7, and with staff given free accommodation in a closed hotel in central Milton Keynes. The Royal Army Logistics Corps were drafted in to solve the hugely complex logistics issues of ordering, storing and stock taking all the equipment and reagents needed to run a lab of that scale. Liquid handling robots were acquisitioned to allow us to automate almost all lab processes, and by the first week in April the lab was operating non-stop at maximum capacity of around 50,000 tests per day. Much of the equipment, of course, was donated by universities, but most importantly, the entire workforce of the facility was composed of quite incredible university researchers who put their careers and lives on hold to provide the testing capacity the country so greatly needed. From professors to undergraduate students, everyone chipped in and gave their all in what was one of the greatest experiences and achievements of my career.

As the lab became established and operating to an excellent level of standard, I felt I was no longer needed at Milton Keynes, and on 1 June 2020 I ended my secondment and returned to Birmingham, naively thinking my time working on viral diagnostics was over once again, having not actually worked in the field since my final postdoc with Professor Ian Brown on H5N1 in 2006. However, in July I was contacted once again, this time to set up a testing lab at the University of Birmingham, to cope with the anticipated surge in cases and demand for testing as autumn 2020 loomed. On 1 September, our university testing lab went live, delivering 5,000 tests per day for the Pillar 2 programme, including testing of swabs taken at our campus testing site and helping local public health teams with outbreak investigations. It was of course a tragic few months for the country as COVID-19 devastated our hospitals, but it was also exhilarating and exhausting to be working on the front line of the pandemic. We were heavily involved in the discovery of the B.1.1.7 Alpha variant in the UK, working closely with Professor Nick Loman’s CoG-UK lab in the university to rapidly test and then sequence the S gene target failures which came to represent the variant in testing labs.

The other area of testing I found myself deeply involved in was the rollout of lateral flow (LFD) testing for SARS-CoV-2. It is fair to say this was one of the most controversial aspects around testing for the virus, with often bitter arguments over their value and merit. From my perspective, I saw them as another valuable tool in an arsenal of weaponry to deal with the pandemic, and alongside wonderful colleagues across the University of Birmingham, we converted our famous Great Hall into a large-scale asymptomatic LFD testing site for SARS-CoV-2 in December 2020, which was overseen by Dr Jack Ferguson and Dr Steven Dunn. Regardless of opinions on the rights and wrongs of mass-scale LFD testing, our experience was that they identified people walking around shedding detectable SARS-CoV-2 without any idea of being infected, and undoubtedly interrupted potential transmission chains on our campus.

What has been quite incredible during the pandemic is the level of interest that has been generated towards infectious disease (ID) diagnostics. For years diagnostics has been massively neglected by both funding bodies and journals. My first ever grants as a principal investigator (PI) in 2006 and 2008 were on rapid diagnostic research, but the level of interest in that work was minuscule and so I developed my genomics and antimicrobial resistance (AMR) interests instead. My hope is that the pandemic opens the microbiology community’s eyes to how important the innovation and development of ID diagnostics is. This is our opportunity to truly solidify the clear value and sustained use of genomics in ID diagnostics, surveillance and epidemiology. We must also now think about how the democratisation of infection testing to self-administered home tests may impact our desire for collections of clinical isolates, and how we do ID epidemiology in the future.

Professor and Institute Director at Birmingham, Alan McNally began his scientific career studying molecular microbiology at the University of Glasgow. He then went on to do a PhD studying gene regulation in Escherichia coli O157 at the University of Edinburgh. A short postdoc in microbial biochemistry at Bristol was followed by two postdoctoral projects at the Veterinary Laboratories Agency in Surrey. It was here that Alan developed an interest in phylogenetics and evolution, which he developed in his first academic PI position at Nottingham Trent University. During 10 successful years, Alan established his group as an internationally renowned group studying microbial genomics and evolution. During the COVID-19 outbreak, Alan was seconded to the Milton Keynes Lighthouse Lab as Infectious Disease lead at the Government’s first flagship COVID-19 testing facility.

I applied to do medicine at university but a mix of grades saw me offered an unconditional place to study Biological Sciences at Glasgow. The first two years were an amazing mix of disciplines, from immunology to human anatomy and, of course, microbiology. I loved the micro teaching and became fascinated by how such simple organisms could have such a devastating effect on human health. A year’s work placement at the microbiology labs at SmithKline Beecham sealed it for me that I wanted to do microbiology research for a living.

Don’t let anyone tell you there is only one sure path to success in microbiology research. Follow your heart and your interests wherever they might take you. I hopped from molecular microbiology to biochemistry to population microbiology, then virology and finally genomics. My best mentor told me that you do the very best science with a smile on your face, and I absolutely believe that and still preach it. So make sure you love and enjoy what you are doing, and if you don’t, find something else that you do.