The role of the oral cavity in SARS-CoV-2 detection, dissemination and disease 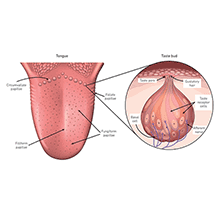 Early in the COVID-19 pandemic, anecdotal reports of the loss of smell (anosmia) and taste (ageusia) were reported as potential symptoms of SARS-CoV-2 infection. The diagnostic significance of these characteristics resulted in the publication of revised guidance in May 2020. Subsequent studies have suggested 65% of all infections may generate a disturbance to one or both of these sensory processes, but clear links between these symptoms and how they vary according to age, sex and ethnicity or impact clinical outcome have yet to be established. However, what these sensory disturbances did highlight was the significance of the nose and mouth in the infection and proliferation of SARS-CoV-2.

The ability to perceive taste involves groups of approximately 50 chemosensory cells, organised into structures on the tongue, called buds. Each bud consists of three types of taste cells and a renewing population of basal cells that are capable of detecting one of five distinct flavours: sweet, sour, bitter, salt and umami. The perception of salt and sour is achieved via receptors that respond to sodium or hydrogen ions, while the other tastes require receptors tuned to specific molecules such as sugars in the case of sweet, glutamate in the case of umami, and a diverse set of molecules including many plant alkaloids for the perception of bitter. Following receptor activation, signals are relayed via dedicated nerves assigned to individual taste buds, then onward to the brain where the responses are integrated with other sensory determinants, including smell, to assign a particular sensation. Each taste bud contains multiple papillae, with fungiform papillae associated with the surface of the tongue and circumvallate and foliate papillae located on the underside or dorsum. True ageusia (loss of taste) is a relatively uncommon phenomenon, believed to be caused by severe nerve damage. Taste disruption (dysgeusia) is considerably more prevalent and can arise from several mechanisms including damage to taste bud cells via direct injury or interventions such as chemotherapy. For viral illnesses such as the common cold, much of the taste disruption experienced is attributed to the absence of smell due to nasal congestion. In the case of COVID-19, where taste dysfunction is prevalent but congestion absent, the cause is currently unclear. Possible mechanisms include direct damage to taste cells during angiotensin-converting enzyme 2 (ACE2) mediated viral entry, indirect damage and impaired turnover of taste cells by localised inflammation, and damage to cells associated with the peripheral and central nervous system. Impaired salivary flow and changes in its composition following viral salivary gland damage has also been proposed as a contributing factor in the taste disruption reported by COVID-19 patients.

Understanding the basis of these sensory disruptions may have broader significance for SARS-CoV-2-mediated disease since several cell lineages expressing taste receptors can be found in the epithelium of the upper and lower respiratory tract and therefore may also be sensitive to disruption. Interestingly, these include solitary chemosensory cells (SCCs) that in the lower respiratory tract are proposed to be involved in modulating the immune response during challenge and supporting the mucociliary clearance of pathogens. In one study, a unique population of SSCs was shown to proliferate in post-influenza virus-damaged lungs, and it would be fascinating to know if a similar process occurs in severe COVID-19 pathology.

To understand the ability of SARS-CoV-2 to infect taste buds and other potentially susceptible oral tissues, initial investigations utilised publicly available databases. The examination of mRNA levels indicated the viral receptor ACE2 to be enriched in several oral epithelial cells, including those associated with the periodontium and the tongue. The salivary glands proved particularly interesting as they appeared to combine significant levels of ACE2 expression with the transcription of both furin and TMPRSS2, encoding key proteases that are important for efficient viral entry. Subsequent studies using cell lines and tissue samples from both humans and animals confirmed the presence of proteins that facilitate SARS-CoV-2 infection in a variety of oral contexts. However, although questions remain about the precise amount and accessibility of these proteins for the infection of specific tissue types, the isolation of 108 viral particles per millilitre of saliva and the detection of virions in the gingival pocket that surrounds the tooth has confirmed that SARS-CoV-2 has the potential to replicate at several sites within the mouth.

As oral COVID-19 research progressed, the focus shifted to the salivary glands and the secretion they produce, saliva. The oral cavity is serviced by four salivary glands that are composed of a variety of associated cell types including serous and mucous acini, basal epithelial, myoepithelial and neuroendocrine cells. Saliva both lubricates and protects hard and soft tissue, determining key features of the oral environment that impact its colonisation by micro-organisms. Its complex mix of components has been extensively studied and shown to have properties that range from promoting wound healing to controlling remineralisation of the tooth surface and, importantly within the context of COVID-19, a number of anti-viral properties. The associated mechanisms include the secretion of salivary glycoproteins that can act as decoy receptors able to bind to the surface of enveloped viruses and therefore both block cell entry and facilitate clearance from the mouth. This mechanism has been proposed for SARS-CoV-2, with several salivary constituents including mucin-7, mucin 5B and salivary gp-340 reported to bind the spike protein in vitro. The direct inactivation of viral membranes by cationic peptides, including histatins 1, 3 and 5, has not been established for SARS-CoV-2 but it is interesting to note that one of these molecules has been shown to inhibit furin in vitro and therefore could interfere with priming of the spike protein. Other salivary constituents such as cystatin S are considered important factors in controlling periodontal disease via their ability to inhibit serine proteases, a feature that has potential implications for TMPRSS2 activity. In this context, it is interesting to note that during active periods of periodontal disease a related protein, cystatin C, can accumulate in the oral cavity, and this molecule has been reported to inhibit the replication of other coronaviruses in tissue culture experiments. Post-infection, the presence in saliva of IgA and IgG antibodies that recognise spike glycoprotein has been reported, with one study recording virus neutralising levels of salivary IgA persisting for up to 73 days post-infection. These antibody results highlight the single most significant anti-viral property of saliva and one which will impact not only possible protection from infection but also the efficiency of onward transmission. However, for context, it should be remembered that all these anti-viral features exist alongside the presence of furin and TMPRSS2 and high levels of calcium, an ion that is involved in the stabilisation of the ACE2 fusion peptide,

At this stage of the pandemic, we still don’t understand why sensory disturbance occurs during some infections and not others or how the balance of salivary constituents varies or impacts susceptibility due to age, sex or ethnicity. Similarly, it is not clear how much the relative expression of the viral receptors in the mouth determines susceptibility. What is clear is that from disease to dissemination the study of the oral cavity’s response to SARS-CoV-2 infection continues to be an important element in understanding the development of the COVID-19 pandemic.

David is a Senior Lecturer at Dundee Dental school; worked on prokaryotic cell division and spore formation at the University of Edinburgh, University of Oxford and Max-Planck fur Entwicklungsbiologie before moving to University of Dundee.

Alex studied dentistry at the University of Dundee and spent time working as a general dentist in Glasgow before undertaking a PhD at the Centre for Host–Microbiome Interactions at King’s College London Dental Institute. Alex currently works at Dundee Dental School as a clinical lecturer in restorative dentistry.

David: I relocated to the Dental School in Dundee 14 years ago and developed an interest in anaerobic bacteria and salivary components that control colonisation and growth. At the start of the pandemic, the developing story on the loss of taste and smell lead to us forming a small team of cell biologists, microbiologists and clinicians who were funded for a seed project to examine how salivary proteins interfere with the SARS-CoV-2 spike protein.

What do you find most enjoyable about your work?

David: One of the nicest aspects of oral biology is the crossover of interest with material scientists, clinicians, cell biologists and microbiologists. Consequently, it has been an easy environment to set up multidisciplinary groups and, in particular, I have found salivary biology to be an underappreciated and fascinating area of research.

Alex: This is an exciting time for microbiology, and there is a lot of variation every day, so there’s no risk of getting bored.