Antibiotic discovery: then and now 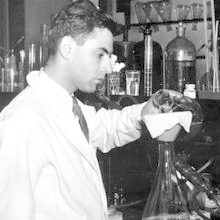 There is much discussion about how we tackle the antibiotic crisis now and in the future, but the story of how we arrived at this point is just as fascinating.

The presence of antimicrobial agents has been known since the days of Louis Pasteur – who else? When Pasteur and Joubert described the phenomenon of bacterial antagonism in 1877, they noted that the growth of Bacillus anthracis was restricted in the presence of other bacterial strains and commented that such activity might well be of therapeutic value. Somewhat later, in 1928, Papacostas and Gaté described a number of examples of the phenomenon, involving different bacterial genera and species. They presented this phenomenon as antibiosis and even used the word ‘antibiotique’. However, it was not until 1945 that Selman Waksman formalised the name and defined an antibiotic as a ‘chemical substance of microbial origin that possesses antibiotic powers’. 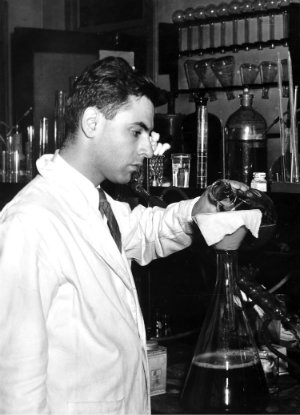 It is now known that many organisms produce chemicals with antibiotic activity and a number of such compounds can be made synthetically. The production of antibiotics and other compounds by microbes was previously considered to be a process of secondary metabolism (usually triggered by signals in later stages of growth and development). However, given the fact that the products are in no way secondary, the preferred description is ‘specialised metabolism’. ‘Antibiotic’ is synonymous with ‘antimicrobial’ and the two are used interchangeably, especially in the popular press. Most are produced by streptomycetes, but bacilli, pseudomonads and fungi all produce a variety of therapeutically active chemicals. Interestingly, the pyocyanins, products of Pseudomonas spp., were used in the late 1800s, and may have been the first antibiotics employed clinically. It is worth noting that some chemicals discovered as antibiotics have had greater value in other medical applications; good examples are cyclosporin and rapamycin (sirolimus) that are active immunosuppressants and have transformed the science of transplantation medicine.

In the late 1930s, the sulfonamides came onto the scene and they proved to be the first revolution in antimicrobial therapy. This genuine target-based therapy (Ehrlich-style) was very successful; even though this class of compounds has a limited spectrum of activity, these drugs were used throughout the Second World War – and still are! The golden age of antibiotic discovery began with the use of penicillin and subsequently streptomycin at the end of the Second World War; penicillin was responsible for saving many lives in the battles following D-Day and in the Japanese campaigns. These two antibiotics were discovered with very primitive, functional screens, the kind that can be done in secondary school classes anywhere nowadays. Of course, the essential discovery process was to isolate, purify and characterise the active compound(s) and show that they are novel, active and non-toxic.

A critical element in the introduction of antibiotics during the early days of antibiotic discovery was the mobilisation of the pharmaceutical and fermentation industries in the US and, subsequently, in the UK. As more companies started looking for bacteria and fungi capable of producing active antibiotics, the actual discovery process changed little, other than in magnitude. Screening depended on manpower, and chemical identification of potential candidate antibiotics was a slow business using the traditional approaches of natural products research. Nonetheless, by the mid-1940s, in addition to penicillin and its derivatives, the first antibiotic active in the treatment of tuberculosis, streptomycin, was discovered by Albert Schatz in Waksman’s laboratory. Subsequent entries into the pharmaceutical arena included chloramphenicol, tetracycline, erythromycin, lincomycin, polymyxin and vancomycin; certainly hundreds of other compounds discovered by Waksman-style screening failed to make the grade because of insolubility, toxicity, instability, serum binding, colour, smell, poor activity spectrum, low yield or some other inadequacy. Screening for compounds was routine and simple, every company isolated many candidates but few made the cut-off.

As physicians throughout the world faced increasing examples of recalcitrant infections due to the development of resistance during treatment, the industry made serious efforts to produce antibiotic derivatives with activity against resistant strains; this became more and more of a losing proposition. Nonetheless, there were notable successes, for example methicillin (now meticillin) and other β-lactamase-resistant penicillins and cephalosporins, and even modified aminoglycosides. However, there was always an Achilles heel in the antibiotic structure and these successes were only temporary.

The development of resistance did not alone lead to the end of the ‘golden era’ of antibiotics. Regulatory authorities have demanded increasingly strict and extended clinical trials for the protection of the human population (especially after the thalidomide disaster) and the ability to meet all requirements has been difficult. In addition, microbes themselves have shown genetic adaptability in ways not previously anticipated. The first reports of transferable antibiotic resistance in the late 1960s were greeted with disbelief from the scientific and medical community. However, it is now recognised as the major factor in the global spread of resistance and efforts to eliminate or prevent horizontal gene transfer have been totally unsuccessful. Why did the golden era end? It seems as if most of ‘Big Pharma’ lost interest in antibiotics at the same time. The older antibiotics still worked in most cases and the enormous cost of new antibiotic discovery and arduous clinical trial procedures discouraged new investment when the long-term and profitable illnesses of an aging population needed attention. Production was even discontinued in the Western world; by the 1980s, most antibiotics were being mass-produced in countries like India and China.

In the late 1980s, a number of pharmaceutical companies made attempts to employ novel high-throughput methodologies to develop screening processes enabling the identification of new antibiotic molecules, but most of the efforts came up empty-handed. There was even a belief that all of the accessible structural scaffolds for antibiotics had been uncovered. Industrial antibiotic discovery reached a new low. However, the advent of the genome sequencing era in 1995 with the success of the Venter group in obtaining the complete genome sequences of two bacterial pathogens triggered a new wave of optimism in the industry since it was thought that these sequences would permit the identification of novel, metabolism-based targets. Several industrial groups took this route, but the success rate was low and the products lacked novelty. In addition, the inherent weakness of ‘designer’ chemical libraries was at fault and the hit rate was very disappointing. This led to additional Big Pharma drop-outs from the field and the onus for antibiotic discovery fell on small biotech companies, most of which lacked the finance and personnel to take advantage of the increasing catalogue of near-complete genome sequences of pathogens. In the 1990s, the only new antibiotics to be introduced were ‘rediscoveries’ from earlier times. The prospects for antibiotic discovery were not promising.

The event that has brought about a major philosophical change in antibiotic discovery was the complete genome sequencing of Streptomyces coelicolor, an antibiotic-producer, not a pathogen. This, the largest bacterial genome to be sequenced at this time (~9.0Mb), was a real eye-opener since it revealed that S. coelicolor, known to produce a small number of pigments and other bioactive molecules, has in fact the genetic capacity to produce more than 20! Suddenly, the claims by pharmaceutical companies about having discovered most of the compounds available became fiction. It became apparent that there are orders of magnitude more antibiotics and other pharmaceutical agents available in nature. Complete genome sequencing studies have revealed that a large number of microbial genera possess many hidden biosynthetic pathways for bioactive molecules: the huge phyla of Actinobacteria and Firmicutes, and the ‘Myxobacteria’, etc. The number is unimagineable. The question is how to exploit this information and obtain the compounds for investigation.

High-throughput metagenomic sequence analysis of microbial populations (microbiomes) from diverse environments has raised awarenessthat bacteria and other microbes do not live in isolation, but exist in huge interactive communities. These communities employ distributed metabolic processes that are regulated by chemical signalling by bioactive small molecules. This was first made obvious by the discovery of quorum sensing interactions in which the signalling molecule concentration is determined by the size of the bacterial population. Quorum sensing has been identified in many bacterial interactions. As mentioned above, most bacterial genomes possess biosynthetic pathways for a large number of small molecules, some of which have been identified as antibiotics. However, these so-called antibiotics may actually be used in nature as signalling agents. Support for this notion comes from the fact that antibiotics at sub-inhibitory concentrations can act as signalling molecules to regulate transcription in bacteria; at these concentrations, they influence multiple cellular activities. Studies of the mode of action of antibiotics have revealed that their targets include the core functions in the cell: transcription, translation, replication and many aspects of metabolism. There is increasing evidence that sub-inhibitory antibiotics do not inhibit, but modulate these functions. For example, the antibiotic rifampicin, a well-characterised inhibitor of RNA polymerase, actually stimulates the production of specific transcripts at low concentrations. The signalling functions of many of these compounds have been demonstrated in cross-kingdom interactions.

The future discovery of new antibiotics and other therapeutic agents can now be envisaged as a process involving the identification of biosynthetic pathways for small molecules, and productive expression of the pathways by cloning into heterologous hosts or by metabolic activation. Structure determination can always be a problem but newer physical methods and sophisticated instrumentation should provide solutions. The compounds obtained can then be detected, purified and screened using sensitive transcriptional assays.

By exploiting the increasingly rapid and sensitive techniques for genome sequencing and bioinformatic analysis, it will eventually be possible to gain complete access to the parvome (the ‘-ome’ of the small chemical molecules produced by living organisms). This will transform drug discovery and provide constant stimulation for new pharmaceutical developments, especially those employing synthetic biology.