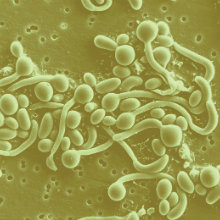 Despite the alarming number of people (not to mention crops and animals) killed by serious fungal infections every year, funding for medical mycology research is disproportionately low. However, the researchers are starting to fight back...

The public have come to recognise infectious diseases caused by bacteria such as MRSA, C. difficile, E. coli and Legionella, viruses (e.g. common cold, influenza, AIDS) and parasites (e.g. malaria, leishmaniasis, sleeping sickness) as household names, while those caused by fungal pathogens such as Candida, Aspergillus, Cryptococcus, Pneumocystis and others, remain unknown, unfeared and often undiagnosed. However, each year fungi are responsible for around 1.5 million deaths and cost $12 billion to treat worldwide. 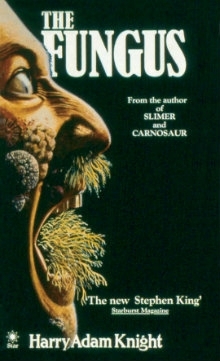 In addition, fungal pandemics threaten ecologically important groups of animals and staple crops in a way that threatens global biodiversity and food security. Why is it, therefore, that so little emphasis is placed on fungal pathogenicity in general, and in particular, only about 2–3% of the infectious disease research budget is currently devoted to medical mycology in the UK, USA and Europe?

The reason is clearly not due to size of the clinical burden – which is impressive. Let’s consider some more statistics and fungal factoids. Fungal skin, hair and nail infections are an itch that affects a quarter of the world’s population. These common infections are caused by dermatophytes and give rise to several well-known conditions, such as athlete’s foot (tinea pedis) and ringworm of the scalp (tinea capitis).

Mucosal infections of the mouth and genitals are also common. For example, it is estimated that 75 million women experience recurrent episodes of vulvovaginal candidiasis (or thrush) annually. Oral thrush is more likely to occur in babies, denture wearers and individuals using inhaled corticosteroids for asthma. Fungal allergy is also common, but robust epidemiological statistics elude us. Although uncomfortable and distressing to the individual, these infections and allergies are not often life-threatening and are generally treatable.

Of greater concern are invasive fungal infections which have much lower incidence rates than superficial infections but have alarmingly high mortality rates, despite treatment with antifungal drugs. Patients with compromised immune systems (associated with cancer, trauma and HIV) and those undergoing invasive clinical procedures (stem cell, bone and organ transplants) are particularly susceptible to these invasive, life-threatening infections, and mortality rates mostly range from 30 to 80% depending on the invading pathogen and the underlying condition. Current figures for incidence and mortality rates are likely to be underestimated due to inadequate epidemiological data, misdiagnosis because of unreliable diagnostics and a lack of global reporting in areas of the world with high endemic disease problems. Incredibly, only one fungal disease (coccidioidomycosis) holds the status of a notifiable disease at the Centers for Disease Control and Prevention (USA).
While there are over 600 species of fungi that can infect humans to cause a variety of diseases, over 90% of all fungus-related deaths are due to species belonging to only four genera; Candida, Cryptococcus, Aspergillus and Pneumocystis.

Candida species are the fourth most common cause of hospital-derived bloodstream infections in the developed world. The estimated annual global incidence of candidiasis, a bloodstream infection caused by Candida albicans, is 400,000 cases per year. Approximated mortality rates for candidiasis are very high, ranging between 46 and 75%. 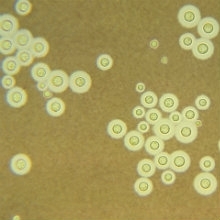 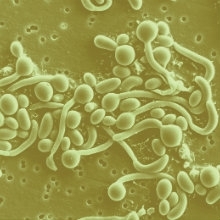 There are over one million cases of Cryptococcus infections per year worldwide. The majority of cases present with meningoencephalitis (meningitis). AIDS patients are particularly susceptible and mortality rates among this group vary significantly, depending on geographical location, with 15–20% in the USA and 55–70% in sub-Saharan Africa and Latin America. It is barely appreciated that the burden of cryptococcal disease in sub-Saharan Africa is so high that it accounts for more deaths than malaria and AIDS-associated tuberculosis.

Aspergillus-related infections mainly arise in the lungs (e.g. chronic obstructive aspergillosis) and can be life-threatening to individuals with underlying conditions like tuberculosis, chronic obstructive pulmonary disease (COPD) and cystic fibrosis. Current estimates for invasive aspergillosis show greater than 200,000 cases per year worldwide and there may be a further 450,000 deaths per annum due to COPD. Despite early diagnosis and treatment, this invasive disease carries an overall 50% mortality rate and, if undiagnosed, the outcome is almost certainly fatal. In addition, Aspergillus fumigatus is also classified as an aeroallergen and is linked to the development of severe asthma with fungal sensitisation (SAFS), which is thought to affect up to 13 million adults worldwide.

Pneumocystis gives rise to pneumonia-like symptoms in immunocompromised individuals. It is the number one most serious infection in people with advanced HIV. Calculations using existing data estimate that the worldwide incidence of Pneumocystis infection is at least 400,000 cases every year with mortality rates varying between 20 and 80%.

Regardless of the global health and economic burden, fungal diseases remain understudied and they remain the unknown superbugs. There is a clear need now to seriously advance our understanding of fungal infection and immunity. Other issues that require urgent attention include the need to invest in the development of safer and more effective antifungal drugs and fast, reliable diagnostics. Again, it is salutary that, in terms of preventing fungal infections, there are currently no approved human vaccines for any fungal pathogen, and this situation needs immediate attention.
In response to a call for urgent action to redress the balance in infectious disease research, the Wellcome Trust has recently awarded a £5 million Strategic Award (WTSA) to the University of Aberdeen to lead a major pan-UK consortium in Medical Mycology and Fungal Immunology, which will tackle some of the major problems in this important but neglected field of medicine. This pan-UK consortium has three objectives: (i) to provide training for a new generation of medical mycologists in areas of the world with high endemic diseases and little specialist expertise; (ii) to build clinical academic capacity in the UK; and (iii) to foster and promote cross-disciplinary research excellence that takes advantage of the highly active, but dispersed communities of medical mycologists in the UK. The focus of the research will be to promote studies that will develop new chemotherapies, immunotherapies and diagnostics through an understanding of fundamental aspects of medical mycology and fungal immunology. The resources that have been funded will support basic science and clinical PhD studentships as well as a limited number of postdoctoral fellowships. Invitations for projects for these posts are available to academic and clinical staff at any UK university. (For information about the funding opportunities supported through this WTSA, please see www.abdn.ac.uk/mmfi)

Mycologists have begun to fight back, but the war has only just begun. High-quality research around the world is beginning to make inroads to these terrible human diseases, and initiatives like the WTSA are enabling the linking of arms and assembly of forces for a coordinated attack on a too-long neglected group of pathogens.

Image: The Fungus, by Harry Adam Knight (published by Star Books), speculates on the fictitious ravages of medical mycology. Used by permission of The Random House Group Ltd.