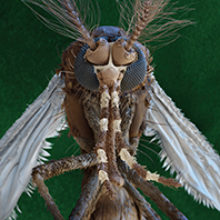 Mosquitoes vector a variety of arboviruses, such as chikungunya, dengue and Zika viruses. Increasing international travel and trade has contributed to the spread of mosquito species into locations from which they were historically absent. The effects of climate change are also predicted to change the distribution of suitable habitats for species capable of transmitting arboviruses (such as Aedes and Culex species); diseases that have predominantly been associated with countries in tropical and subtropical regions, now also have the potential to become a serious threat to countries further from the equator.

The most effective way to prevent arbovirus infection is management of their insect vectors. Pesticides are still the most effective means of mosquito population control currently available; however, pesticide resistance and the environmental impact of the extensive use of insecticides urges research into alternative strategies for preventing arbovirus transmission. Such alternative strategies include genetic modification of mosquitoes – with the aim of either population suppression or population replacement.

Population suppression strategies aim to reduce the number of vector mosquitoes in a certain area, to a level that will inhibit disease transmission. An example is genetically modified mosquitoes engineered by Oxitec that carry a repressible lethal gene. Males carrying this gene are released into the field. If they successfully mate with a wild-type female, offspring will die – if sufficient males of sufficient quality are released, the target population will decline and collapse. For this technology to be successful, certain conditions need to be met: quite a large number of male mosquitoes needs to be released in order to achieve the desired effect, though this number can be reduced once the target population has been suppressed; the released males need to successfully compete with wild-type males for a mating partner; males need to be released on a spatial scale appropriate for their dispersal distance – for Aedes aegypti this is typically less than 100 m, though may be higher for other mosquito species. Releases of such males have been successfully conducted in locations such as Brazil, Grand Cayman and Malaysia. Other means of sterilising males, such as the use of cytoplasmic incompatibility, have similar properties, though with some differences in detail. In theory, and in laboratory cage experiments but not yet in the field, infertility may be spread through a target population more aggressively by the use of gene drive systems (a genetic strategy for achieving super-Mendelian inheritance). Such approaches potentially require much lower release numbers, so deployment may be much cheaper, but they are also harder to control, i.e. limit or reverse after release, so regulatory and social issues will likely be more problematic.

Population modification strategies, also known as population replacement, aim to spread a gene into vector populations that reduces the vector competence of mosquitoes without killing them; if successful, the vectorial capacity of the population would be reduced without substantially reducing the number of mosquitoes. While such ’refractory’ genes could be introduced by mass-release of modified mosquitoes, for long-term persistence and economic reasons relating to release numbers, it is generally assumed that for large-scale use, the refractory gene(s) will need to be coupled to a gene drive, though initial trials might use simple mass release.

What gene or genes might we use to reduce vector competence? One such genetic system, conveniently coupled to a gene drive system, has been found in nature. wMel, a strain of Wolbachia found in fruit flies, protects the flies from some pathogenic viruses. Artificially transplanted to Aedes aegypti mosquitoes, it reduced the ability of such mosquitoes to transmit dengue virus. Wolbachia is maternally inherited and uses various tricks to bias inheritance in its favour, thereby representing one of the many gene drive systems found in nature. Though the molecular basis of the virus-suppressing activity, and indeed of the gene drive mechanism, is poorly understood, this gene drive-plus-refractory system has entered field trials in several countries.

Many other gene drive systems are known in nature and have inspired attempts to develop synthetic ones. None have yet reached field trials, partly because of the difficulty of engineering robust gene drives and partly because of regulatory and social issues around the use of recombinant DNA methods that Wolbachia-based methods have to date avoided.

Several additional aspects affecting gene drive function will require further field work to resolve, particularly issues around the field ecology and population structure of mosquitoes. Aedes aegypti, an important disease vector, is more than happy to spend its whole life in one’s backyard where it usually finds all it needs – mating partners, a blood source (such as the human occupants of the house), an energy source (nectar from flowering plants) and breeding grounds (any standing water, for example bird feeders). Low mobility may increase the need for human intervention to spread a gene, where this is desired, but can, however, also be an advantage when an effect is only aimed to be achieved in a certain area at a particular point in time, perhaps for targeted population suppression. In such a case, a highly targeted reduction of a mosquito population could be achieved with minimal environmental impact and off-target effects to other species.

Let’s assume for a moment that we would have a gene drive that works in the desired way – what would then be a desired trait to drive through a mosquito population? For anti-virus traits, that would depend on the mosquito species (as different species are vectors for different arboviruses) and perhaps also the intended area for use (as different arboviral diseases or combinations of those are endemic in different areas of the world). Even for a given vector–virus combination, there are a range of potential approaches to engineering refractoriness, as well as the possibility of co-opting existing ones, as with Wolbachia. Most strategies developed so far aim to utilise antiviral insect immune pathways, especially RNA interference (RNAi), which is a major antiviral immune response in insects. Mosquitoes expressing long hairpin versions of virus sequences showed good resistance against dengue virus. Similarly, systems expressing small interfering RNAs have been developed to confer resistance against specific viruses (namely Zika, dengue and chikungunya) in transgenic mosquitoes.

Other elements of the insect immune system can also be used, for example the JAK/STAT pathway. Modulations of this pathway have been shown to provide reduced susceptibility to dengue virus infection; however, this approach was to date not found to be effective against chikungunya or Zika viruses. This might reflect a lesser importance of the JAK/STAT pathway in the antiviral immune response in insects compared to the RNAi pathway.

Entirely exogenous factors may also be useful, for example expression of specific single-chain antibodies, which have been used to reduce vector competence for both viral and cellular pathogens. Immune effectors from other species, such as antimicrobial peptides, have also been shown to be effective in some cases.

A significant challenge to geneticists developing such systems is to achieve the desired effect without adversely affecting the mosquito. Off-target effects of various types might impose a fitness cost on transgenic mosquitoes. If this is the case, mosquitoes carrying the desired trait have a (potentially significant) disadvantage compared to their wild-type counterparts. This might manifest through any of a range of traits such as development time, longevity, mating competition or fecundity, and perhaps only under certain conditions. Off-target effects and fitness costs can potentially be reduced by restricting expression of system components to key tissues for virus infection and transmission, especially the adult female midgut and salivary glands. This may be achieved using tissue-specific promoters for the expression of the gene of interest, such as using a carboxypeptidase promoter which is induced by a bloodmeal and the expression is restricted to the midgut. This means that the payload gene would only be expressed at a time point in a female’s life – only females blood feed – when there is the potential that it acquires an arbovirus infection (through an infectious bloodmeal) and would be restricted to the body tissue that is the first defence barrier against arbovirus infection in mosquitoes. Despite some notable successes with such systems, the range of promoters and other tools for mosquito synthetic biology is still very limited, which restricts the possibility for rational design of both gene drive and pathogen-refractory systems, correspondingly increasing the amount of trial-and-error and time required. Although many questions are still unanswered and there are many challenges to overcome, genetic modification of mosquitoes has the potential to ease the burden of arboviral diseases imposed on millions of people worldwide, while at the same time reducing the environmental footprint and health implications that come with the extensive use of insecticides.

Christine Reitmayer joined the Arthropod Genetics Group at The Pirbright Institute as a postdoctoral research scientist in 2018. She is engaged in research designing transgenic mosquitoes less capable of transmitting viral diseases and is interested in novel strategies of vector control as a means of preventing disease transmission.

Priscilla Tng is a research scientist in the Arthropod Genetics Group at Pirbright Institute, developing viral refractory genes for gene drives. She obtained her Diploma in Biology from the University of Würzburg and worked for six years at DSO National Laboratories, Singapore, in combat care. She joined the Pirbright Institute in 2016.

Luke Alphey works in the emerging field of genetic pest management, particularly on synthetic biology approaches in mosquitoes – building engineered sterile males, gene drives and mosquitoes less able to transmit viruses. Professor Alphey was selected as a Technology Pioneer of the World Economic Forum in 2008 and BBSRC Innovator of the Year 2014.

Christine: It was definitely the decision to undertake my PhD project at the University of Southampton, which was the first step towards a research career and also ended up being a very pleasant experience. I was supervised by two incredibly dedicated and motivated supervisors, who not only taught me many useful skills, but also shaped my understanding of science and the responsibility that comes along with working in research.

Christine: It sheds light on an otherwise invisible world which is crucial to understanding health and wellbeing.