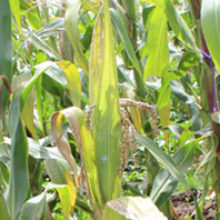 Arthropod-borne viruses are a major and growing threat to crop-based agriculture and native plant communities. Almost half of the emerging infectious agents threatening plants are viruses.

In some cases, this is because viruses are inadvertently spread or introduced into new areas by human activity, but climate change is playing an increasing role by altering the geographic ranges of viruses’ arthropod vectors. Climate change, by increasing ambient temperature and carbon dioxide levels, may also decrease a plants’ ability to resist infection by viruses and colonisation by arthropod vectors. Higher temperatures also enhance vector reproduction rates. Most viruses – an estimated 60–70% – that infect land plants are vectored by arthropods, the vast majority of vectors being insects. Leaf chewing or puncturing herbivorous insects (such as beetles and thrips) transmit several viruses, some of which are very important, but the most common vectors are hemipterans – insects like aphids, whiteflies and leafhoppers that have piercing, needle-like mouthparts called stylets. Stylets enable these insects to penetrate plant cells and tissues and extract nutrients. During this feeding process, virus particles are easily acquired from virus-infected plants or deposited into new hosts.

Which types of viruses attack plants and how do they interact with vectors?

Most plant viruses have RNA genomes and relatively simple particle structures. A smaller number have DNA genomes but these include the geminiviruses (named for their ‘twinned’, dumbbell-shaped particles), that are mostly transmitted by whiteflies and leafhoppers, and which cause devastating losses to important crops such as cassava. Most plant viruses do not infect their arthropod vectors. For example, most viruses transmitted by aphids (the largest group of vectors) are carried for a fairly brief time on the stylet (‘non-persistent’ transmission). Others are taken up through the aphid’s gut wall and circulate within the insect until particles reach the salivary glands and can then be injected into a plant host (‘persistent’ transmission). In most cases of persistent transmission by aphids, the viruses do not replicate in the insect’s cells. The process is further remarkable in that safe passage of virus particles from gut to salivary gland is dependent upon a protein (‘symbionin’) that is released by bacterial endosymbionts living within specialised cells of the aphid.

However, a few plant viruses with double- or single-stranded RNA genomes do infect their insect vectors. These are therefore animal as well as plant viruses. Perhaps not surprisingly, these viruses belong to groups better known for causing disease in humans: reoviruses, rhabdoviruses and tospoviruses (members of the virus family Bunyaviridae). The relationships of these plant viruses to vertebrate-infecting viruses is one line of evidence indicating that insects are not only effective vectors but also ‘bridges’ that have facilitated the cross-Kingdom adaptation and evolution of new viruses.

Which regions and crops are at risk from plant arboviruses?

The short answer to this question is everywhere and all of them. In more developed countries arthropod-transmitted viruses have been controlled with variable success by using insecticides to kill the vectors. Unfortunately, this drives the evolution of insecticide-resistant vectors and the unintended damage caused by insecticides to beneficial insects, such as pollinators or natural predators of pests, has led to restrictions or bans on certain chemicals. For example, turnip yellows virus is persistently transmitted by aphids and can cause serious losses to oilseed rape and sugar beet crops. In the UK its transmission was controlled effectively using neonicotinoid insecticides. However, neonicotinoids can be deleterious to bees and so their use was recently curtailed. It is uncertain what impact this will have on the productivity and sustainability of crops protected using this insecticide family.

The most severe effects of plant arboviruses on crop production are seen in tropical or subtropical regions where the abundance of vectors is greatest. Africa provides some of the most important and challenging plant arbovirus problems. The leafhopper-vectored geminivirus maize streak virus is a problem throughout Africa, and in eastern and central Africa invasive whiteflies spread geminiviruses that cause cassava mosaic disease and may be spreading westwards. A number of important diseases result from mixed infections, in which two or more viruses ‘synergise’, causing more serious symptoms than a single infection by one of the partners. Typically, the viruses are unrelated and are carried by different vectors. This is true for some well-established diseases such as sweet potato virus disease (capable of causing yield losses of more than 90%) that is caused by a synergistic infection by an aphid-transmitted and a whitefly-transmitted virus. The current serious outbreak of maize lethal necrosis disease in east and central Africa, which can cause total loss in infected maize fields, is caused by a synergistic double infection by indigenous strains of sugarcane mosaic virus (transmitted by aphids) in combination with the beetle- or thrips-transmitted maize chlorotic mottle virus, which was inadvertently introduced from Asia. Our work in Kenya and Ghana indicates that introduced viruses may also be threatening legume and brassica crops, respectively.

Perhaps the most ‘successful’ invasive arbovirus is the tospovirus tomato spotted wilt virus that infects not only tomato but also over 1,000 other plant species, including many crops. The virus is transmitted by thrips, especially the western flower thrips. The virus also infects thrips, causing changes in feeding behaviour on plants that enhance inoculation efficiency. Tomato spotted wilt was first described in Australia 100 years ago but, along with its thrips vector, has now spread worldwide. In Uganda, for example, this virus has become a greater concern for tomato production than the indigenous whitefly-transmitted geminiviruses, which already cause serious losses.

Can we control plant arboviruses?

As already mentioned, although insecticides can be effective crop protectants, problems arise from off-target effects on beneficial insects and from the evolution of resistant vector strains. Fortunately, there are a significant number of natural plant resistance genes that can be bred into crops to protect against the viruses. There are also a few examples of resistance genes that work against vectors. Unfortunately, conventional crop breeding is a time-consuming process and is unable to move resistance genes between different plant species.

Genetic modification of plants, for example, by engineering them to express RNA molecules that induce destruction of viral nucleic acids (RNA silencing), provides extremely effective virus resistance. A similar approach can also protect against vectors. More recently, gene editing has been used successfully to mutate genes encoding host factors needed by viruses to replicate in plants. Unfortunately, despite the effectiveness of these approaches there is a reluctance to use these technologies, in large part due to a public perception that plant genetic engineering is intrinsically harmful or because large corporations were involved in development of the technology. A possible way forward is the treatment of plants with synthetic RNA molecules to induce RNA silencing against viruses, which may prove more acceptable since no genetic engineering is involved.

An approach that some of us have been investigating is to better understand the volatile chemical signals (‘semiochemicals’) emitted by plants that attract or deter vectors. Virus infection can alter the composition of the volatiles emitted by plants and this may engender changes in vector–plant interactions that will enhance transmission. Understanding how these chemical signals influence vector behaviour could provide a means of protecting against arboviruses by decoying or trapping vectors or warding them away from crops.

Mauck KE. Variation in virus effects on host plant phenotypes and insect vector behavior: what can it teach us about virus evolution? Curr Opin Virol 2016;21:114–123.

John Carr has been a member of the Microbiology Society for over 20 years. He teaches plant virology and plant–microbe interactions at the University of Cambridge. John’s collaborations with the co-authors have been facilitated via the GCRF-CONNECTED Network (connectedvirus.net).

Ken Okwae Fening is a Senior Research Fellow (Agricultural Entomologist) from the Soil and Irrigation Research Centre (SIREC), and the African Regional Postgraduate Programme in Insect Science (ARPPIS), University of Ghana and his UK collaborative work was facilitated by a Caprex Cambridge-Africa Fellowship and a GCRF Impact Acceleration award.

Paul Kuria is a research scientist from the Kenya Agricultural and Livestock Research Organization in Nairobi, Kenya. His research is focused on understanding transmission, molecular mechanisms of host resistance and interaction of viruses in cassava, maize and fruit trees.

Alex Murphy is a Senior Research Associate at the University of Cambridge and carries out research on plant–arbovirus–insect interactions and antiviral resistance mechanisms.

Josiah Musembi Mutuku is a scientist at the Biosciences eastern and central Africa-International Livestock Research Institute (BecA-ILRI) Hub in Nairobi, Kenya, and a Visiting Scientist at the Plant Sciences Department, Cambridge, where he researches aphid-vectored plant viruses of legume crops.

Mildred Ochwo-Ssemakula is a Senior Lecturer in Plant Pathology at Makerere University, Uganda. Mildred works on viral diagnostics and host–vector–pathogen interactions and development of strategies for management of diseases affecting horticultural and staple crops in Uganda.

John Carr: The activities of microbes including viruses make all other life possible and most fundamental discoveries in biology have had their beginnings in microbiological and virological research.

John Carr: Hearing the news that a former student or postdoc has started their own lab.