The role of global advocacy in the eradication of malaria 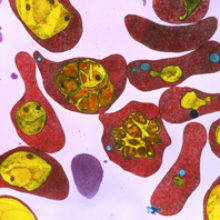 Malaria is one of the world’s oldest and deadliest diseases. It has afflicted people for centuries, contributed to the fall of the Roman Empire, and is responsible for millions of deaths.

Malaria is caused by five species of a single-celled protozoan parasite called Plasmodium, transmitted by female mosquitoes. It typically results in flu-like symptoms, which, if left untreated, can progress into severe illness and death. Today almost half the world’s population is at risk from malaria, despite it being treatable and preventable. The burden is concentrated in Africa where a child dies every two minutes from the disease – young children are at greater risk from malaria as they have not yet developed natural immunity.

Over the past 70 years, global advocacy has played an important role in reducing the global burden of malaria. In 1955 the World Health Organization (WHO) launched the Global Malaria Eradication Programme (GMEP). Through this campaign, countries in Europe, America and Asia eliminated malaria, largely through indoor residual spraying with insecticides (primarily dichlorodiphenyltrichloroethane, known as DDT) and mass drug administration of the antimalarial chloroquine. However, in 1969 amidst growing mosquito resistance to DDT, parasite resistance to chloroquine, resurgence of a malaria epidemic in Sri Lanka following failed attempts to eliminate it and funding shortages, the GMEP was abandoned. No major progress had been made in sub-Saharan Africa. The World Health Assembly was forced to admit that in certain regions the approach should revert back to ‘malaria control with the ultimate aim of malaria eradication’.

In the following decades, global support and investment in malaria control stalled. Europe, with its developed public health infrastructure, was able to capitalise on the progress made and was officially declared to have eliminated malaria in 1975. However, many poorer countries experienced increased malaria cases and deaths. By the 1980s malaria had returned to parts of Europe, highlighting the fragility of malaria elimination.

One of the harsh lessons from the failure of the GMEP was the need for better understanding of malaria, and for new interventions for malaria control. The scientific community responded with the development of insecticide-treated bed nets to protect people at night when the mosquitoes are active, artemisinin-based combination drug therapies, and rapid diagnostic tests.

In 2000, malaria was placed back on the global agenda, but this time with a more cautious goal. The disease was recognised as one of the largest barriers to global development and, to address this, world leaders committed to “halt and reverse the incidence of malaria” by 2015, under target 6c of the UN Millennium Development Goals (MDGs). Concerted international efforts over the next 15 years, using these new interventions and accompanied by huge increases in global funding for malaria control, resulted in unprecedented progress – a 37% global decline in the rate of new malaria cases, and a 60% decrease in the global malaria death rate, amounting to 6.2 million fewer malaria deaths. Europe once again reported zero indigenous malaria cases; however, sub-Saharan Africa still shouldered an estimated 90% of the global disease burden.

To build on the successful attainment of the MDG target, a far more ambitious target was set in 2015 as part of the Sustainable Development Goals (SDGs); to ‘end the epidemic of malaria’ by 2030. Member states of WHO endorsed the vision of a world free of malaria and developed a ‘Global Technical Strategy for Malaria 2016–2030’ to provide a framework to move towards this vision – including targets to reduce malaria case incidence and mortality by 90%. This strategy highlighted the need for “unremitting political commitment, substantial and predictable financing, and increased regional collaboration” in order to meet the ambitious targets set. Now malaria eradication is back on the global agenda.

Worryingly, in 2017 progress on malaria control was reported to be in decline. After years of reduction, global malaria cases have risen since 2015, and all 10 of the highest-burden African countries reported increases. Investment in malaria control, although relatively stable falls far short of what is required to meet the WHO targets.

“If we continue with a ‘business as usual’ approach – employing the same level of resources and the same interventions – we will face near-certain increases in malaria cases and deaths”. Dr Tedros Adhanom Ghebreyesus, WHO Director-General, World Malaria Report 2017.

WHO called for a new country-led approach, ‘High burden to high impact’ to accelerate progress against malaria in the countries it hits hardest.

Earlier this year, RTS,S (Mosquirix) the first-ever vaccine that has shown a protective effect against malaria in young children, was rolled out in Malawi as part of a vaccine pilot programme. Although in clinical trials the vaccine only prevented 40% of cases, this has the potential to save many lives and contribute to malaria eradication. The development of this vaccine by GlaxoSmithKline took 32 years and was funded by a public–private partnership with the Path Malaria Vaccine Initiative with support from WHO, and various international non-profit organisations.

As with the MDG malaria target, it took sustained global political will, significant financial investment and scientific innovation to develop a malaria vaccine. It remains to be seen over the next decade whether this renewed call for action against malaria, along with the use of new interventions, is translated into the global advocacy needed to achieve the SDG target, and progress towards a world free of malaria.

In recognition of the complementary roles of microbiological innovation and global advocacy, the Microbiology Society’s A Sustainable Future project aims to highlight the role of microbiology in addressing the SDGs. To find out more about the project please visit the SDGs area of our website or contact [email protected] with any questions.

Roll back Malaria Partnership: Progress and Impact Series. Eliminating Malaria: Learning From the Past, Looking Ahead; 2011. https://path.azureedge.net/media/documents/MCP_rbm_pi_rpt_8.pdf [accessed 4 June 2019].