The symbiosis that changed the world 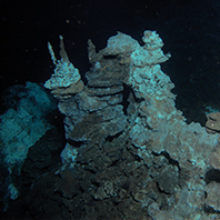 All cellular life on Earth can be classified into one of the three domains: bacteria, archaea or eukaryotes. Whereas cells of bacteria and archaea are small and simple, those of eukaryotes are generally bigger and complex, containing a nucleus that encompasses DNA, and other subcellular compartments, referred to as organelles.

There is evidence that eukaryotic cells arose during evolution from a merger of less complex cells, through a process called endosymbiosis. Recent findings have provided exciting insights into the main players in this enigmatic symbiosis that was responsible for the emergence of all complex life forms on our planet.

Bacteria and archaea are known collectively as ‘prokaryotes’ (from the Greek: pro = before, karyon = nucleus), as their genetic material is not enclosed by a nuclear membrane. In addition, prokaryotic cells are generally ‘simple’: they are small, single-celled organisms (typically between 0.5 and 5 microns in diameter) with a cell wall and a small circular chromosome. Eukaryotic cells (from the Greek: eu = true, karyon = nucleus) on the other hand are a potpourri: they can be much bigger (generally between 10 and 500 microns), and contain a diversity of specialised compartments, of which the nucleus houses the genomic DNA and is the hallmark. Other compartments include, for example, the mitochondria (best known as the ‘power-house’ of the cell, where energy production occurs), and a sophisticated endomembrane system (Fig. 1). Among evolutionary biologists, the question of how these eukaryotic cells and their complex features evolved has been the subject of heated debate for decades.

Fig. 1. A typical eukaryotic cell and its complex subcellular organisation. 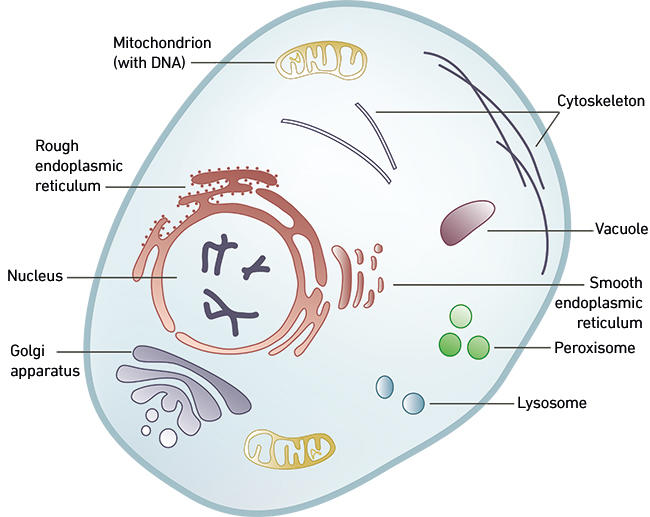 A symbiotic origin of eukaryotes?

The observation that eukaryotic cells are compartmentalised was made a long time ago. Konstantin Mereschkowski (1855–1921) noticed certain structural similarities between plant chloroplasts (the organelles in which photosynthesis occurs) and unicellular cyanobacteria, a group of photosynthetic bacteria. In 1910, he proposed that the former evolved from the latter, as the result of endosymbiosis. This refers to a process by which a cell lives inside another after being engulfed and establishes a long-term association with its host. In the 1960s, the idea that endosymbiosis might have played a pivotal role in eukaryotic evolution was re-popularised by Lynn Margulis. She proposed that, apart from chloroplasts, mitochondria also evolved from trapped free-living bacteria. The scientific community initially dismissed Margulis’ ideas. But when it was discovered that mitochondria and chloroplasts contained their own genetic material that turned out to be related to that of bacteria, support for the endosymbiosis theory finally gained momentum. In particular, mitochondria were found to descend from a bacterial group known as the Alphaproteobacteria. These bacteria are usually free-living, but some can engage in symbioses with eukaryotic organisms. Symbiotic interactions are common practice in the microbial world, but alphaproteobacteria seem to be particularly good at this. In light of this, it is perhaps not too surprising that mitochondria have an alphaproteobacterial ancestry.

Whereas the alphaproteobacterial identity of the mitochondrial ancestor has been known since the 1980s, the nature of the cell that engulfed them (the host cell) has remained elusive. Ever since Carl Woese and co-workers discovered the archaea in the 1970s, it was clear that the host cell was somehow related to these organisms – but how exactly was unclear. According to the view that was prevailing up to the 2000s, archaea and eukaryotes represented sister, but separate, groups in the tree of life (Fig. 2a). This view is most compatible with scenarios in which many of the cellular features that define eukaryotes evolved prior to the mitochondrial endosymbiosis. The host cell, in these scenarios, was thus a complex ‘proto-eukaryote’ that most likely engulfed the mitochondrial endosymbiont using phagocytosis – an energy-demanding ingestion process only known to exist in eukaryotic organisms.

In contrast, other scenarios have suggested the fusion of a ‘normal’ archaeon with an alphaproteobacterium. In fact, they proposed that the mitochondrial endosymbiosis was the first event at the origin of eukaryotic cells: the burst of energy provided by mitochondria then allowed the elaboration of the complex features that are characteristic of eukaryotes, including phagocytosis. These models posed that the archaeal partner and the mitochondrial progenitor engaged in a syntrophic interaction – a symbiosis based on exchange of nutrients that is mutually beneficial. In time, this syntrophy became more intimate, culminating in the engulfment of the mitochondrial progenitor by the archaeal host cell. Yet, these so-called symbiogenic models for the origin of eukaryotes presented several problems. First, they implied that eukaryotes evolved from a bona fide archaeon, and not as a sister group of all archaea, which was at odds with the generally accepted topology of the tree of life. In addition, how did the endosymbiont end up inside the archaeal host cell if the process of phagocytosis evolved later? Finally, a third problem concerns cell membranes: eukaryotic membranes are radically different from archaeal ones, and in fact resemble bacterial membranes. Whereas the membranes of archaeal cells are comprised of isoprene-based lipids, eukaryotic membranes are similar to those of bacteria, which are made up of lipids with fatty acid chains. Hence, if eukaryotes evolved from an archaeon, how can their membranes contain bacterial-type lipids?

Fig. 2. Two main competing hypotheses regarding the origin of eukaryotes. (a) Eukaryotes and Archaea were long believed to be independent sister groups. (b) Eukaryotes are now thought to descend from an archaeon. Their closest known relatives are Asgard archaea (Lokiarchaeota-related archaea).

A paradigm gets shifty

For a long time, hypotheses for the origin of eukaryotes were mostly based on cytological observations, and, in the 1980–90s, on limited amounts of available molecular (sequence) data. This all started to change in the genomic era, when newly developed genome sequencing technologies made it possible to perform genome-wide studies to investigate eukaryotic origins. Intriguingly, such studies brought about a paradigm shift: efforts to reconstruct the tree of life started to reveal a picture in which eukaryotes emerged from within the archaeal domain (Fig. 2b). In particular, eukaryotes were found to group together with the ‘TACK’ archaea, a group of diverse archaeal species, which seemingly contain a number of genes that they uniquely share with eukaryotes. These observations were in support of some symbiogenic models for the origin of eukaryotes, which invoked a TACK-related archaeal host cell and an alphaproteobacterial endosymbiont. However, among the TACK archaea, scientists were not able to pinpoint a specific lineage as being more closely related to eukaryotes than the others.

Recently, this story got an unexpected twist. In 2015, a new group of archaea was discovered in deep-sea floor sediments of the Mid-Atlantic Ridge, close to a hydrothermal vent system known as Loki’s Castle (Fig. 3). By sequencing DNA that was isolated directly from these sediments, we obtained genomic data for a new archaeal group, which we named ‘Lokiarchaeota’ – or ‘Loki’ for short. Fascinatingly, not only did Loki appear to be the closest relative of eukaryotes in the tree of life, but its genome contained a multitude of genes that were only known to exist in eukaryotes. Among these genes were those that play an important role in eukaryotic cell biology – genes that, in a way, make the essence of a eukaryote. Yet, apart from these eukaryotic-like genes, Loki seems to be a typical archaeon. In fact, the role of these genes in Loki is still a mystery. Even more recently, we discovered additional Loki-related archaea and named them after other Norse gods (Thor, Heimdall and Odin); they all contain a large number of ‘eukaryotic’ genes. These discoveries reinforce the idea that eukaryotes have an archaeal ancestry, and that these ancestors were perhaps ‘primed’ to become complex. Future studies focusing on elucidating the cell biology and physiology of our closest prokaryotic relatives will likely reveal important clues about how, billions of years ago, complex eukaryotic cells evolved from the much simpler archaeal cells.

Fig. 3. Image of a hydrothermal vent field along the Arctic Mid-Ocean Ridge, close to where 'Loki' was found in marine sediments. The hydrothermal vent system was discovered by researchers from the Centre for Geobiology at the University of Bergen, Norway. 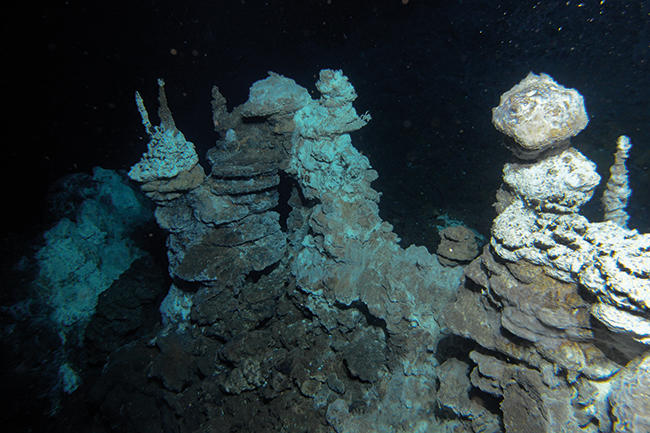